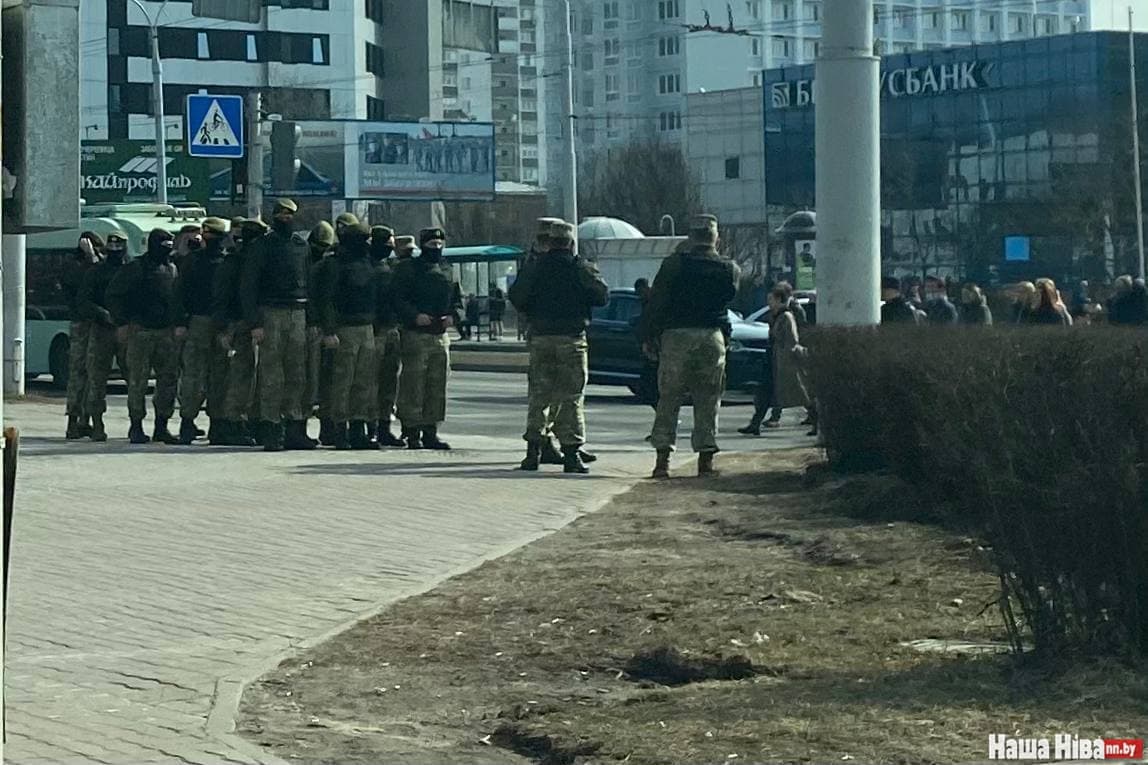 The security forces return to indiscriminate mass detention in the capital, bringing in troops with riot gear and pre-emptively harassing activists in Minsk and the regions. The authorities are trying to suppress discussion of negotiations and dialogue about the transit of power and demonise protest symbols. The National Bank and the Ministry of Finance are restraining the security forces’ attempts to embezzle additional funds from businesses.

The Belarusian leadership refuses to engage in dialogue with opponents. Events to celebrate Freedom Day were banned by the authorities, despite registered political organisations’ attempts to organise sanctioned actions.

On March 25, trucks, barrage vehicles, buses and cars with coils of barbed wire were moved into Minsk as the number of detainees in the country exceeded 200, returning to the level of late autumn 2020.

Detentions, arrests, searches and criminal prosecutions are being extended to include representatives of the Polish minority, following in the wake of prior actions against journalists, human rights activists, and lawyers, as well as trade unionists, party, youth and local activists. Security forces also arrested the leaders of registered parties, such as Mikalai Kazlou of the UCP and the Ihar Barysau of the BSDP.

The authorities are weaponising historical memory and widening ideological divisions in society to marginalise opponents and protest symbols. At a requiem rally in Khatyn, Lukashenka drew parallels between demonstrators under the white-red-white flag and WWII collaborators.

The Council of Ministers has classified the plans for the “social and economic development of the Republic of Belarus for 2021” as a state secret. This restriction of access to information regarding socio-economic decisions fuels public fear about monetary and financial stability and increases the likelihood of rising tensions in society.

Tensions are mounting in the ruling class over the intervention of the security forces in the economy. The National Bank and the Ministry of Finance have supported the position of the business union, criticising proposals from the State Control Committee to change (detrimentally) the working conditions for individual entrepreneurs.

The authorities hesitate to purge the IT sector (including the possible liquidation of the HTP), despite the concentration of support for protests in this area. Meanwhile, companies continue to relocate their employees and businesses to neighbouring countries.

Nevertheless, the redistribution of resources and influence of nomenklatura groups persists. Inspections by the State Control Committee resulted in 28 pharmacies being closed pending further action.

On the other hand, the authorities continue to support loyal private business interests such as The Alexin family, who have acquired another collective farm to increase food market capacity.

Via these repressive actions, the security apparatus intends to thoroughly purge the public sphere of manifestations of discontent.