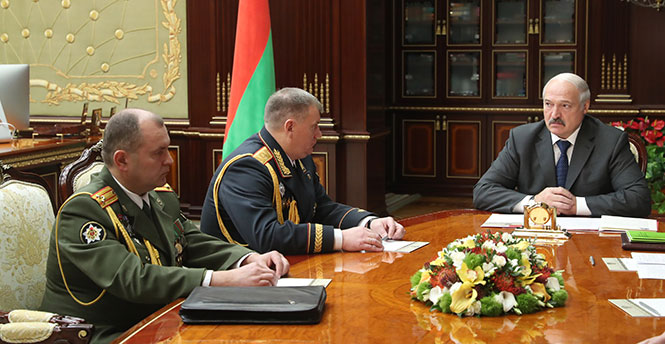 A controversy related to illegal practices in the army and reduced fears of external military aggression are likely to have a negative impact on the influencing role of the Defence Ministry leaders. Simultaneously, due to economic recession, internal security issues have taken central stage.

Illegal practices in some military units have been a personal blow to Alexander Lukashenka and undermined his confidence in the Defence Ministry leadership. For instance, on November 20th, 2017, during a meeting with the newly appointed heads of Interior and Defence Ministry units, the Belarusian leader spoke out harshly to Defence Minister Andrei Ravkov. In particular, he called the death of conscript Alexander Korzhich a reputational disaster for the army and accused the minister of losing control over the situation and the Defence Ministry of rigidity.

Lukashenka has marked the Interior Ministry as a positive alternative to the Defence Ministry. He instructed to transfer the police experience in working with conscripts to the army. He also made it clear that compulsory military service required reforms, having sided with proposals of civil society.

Simultaneously, the president talked about the need for tough response of the police to any attempts to destabilize the situation inside the country or organised riots, hinting that external forces could be interested in this.

Apparently, Lukashenka’s confidence in the Defence Ministry leadership has been largely undermined. Such trust is the only resource and indicator of political weight and influence in Belarus. The Belarusian authorities have less fears of external military threats (hybrid or conventional) now. Amid socio-economic crisis, the Belarusian leader considers internal security threats of primary concern. The Interior Ministry has demonstrated a positive dynamics in its activities, which created the preconditions for the growth in influence of Internal Affairs Minister Shunevich and compromised most expensive plans of the Defence Ministry. For instance, the procurement of Su-30SM, new Russian made heavy fighters, and the massive modernization of tanks to the level of T-72B3.