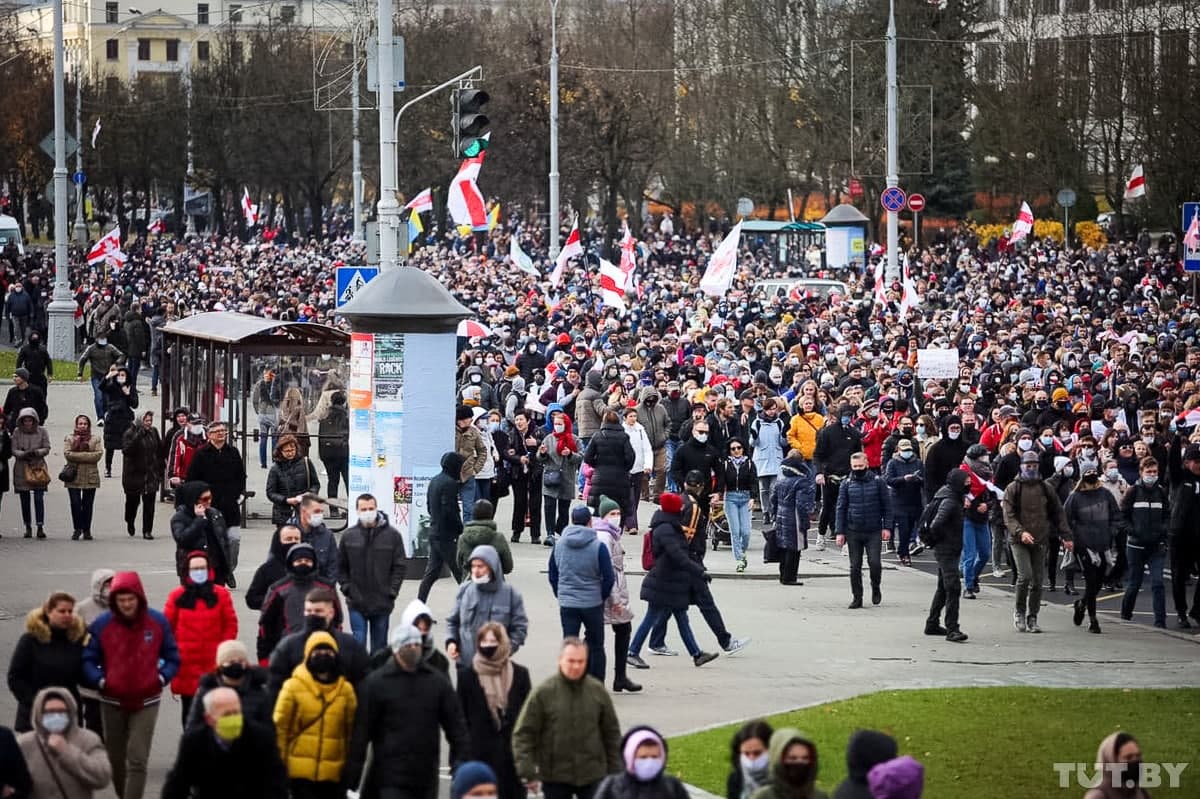 A nationwide strike in support for Tsikhanouskaya’s ultimatum was only partly successful. The degree of conflict between the authorities and society has increased. The authorities arbitrarily accuse the protesters of terrorism.

On October 25th, more than 600 people were detained, at least four were seriously injured in flash grenade blasts.

On October 26th, a nationwide strike began due to the authorities’ failure to comply with Tsikhanouskaya’s ultimatum (stop violence, release political prisoners, schedule new elections). In anticipation of the strike, the authorities started repressions in the morning of October 26th: arbitrarily detained drivers and damaged cars which clearly manifested the support for the strike.

The strike committees at Grodno Azot, MTZ, MKZT, MTZ, Belkommunmash, Atlant, Belaruskali, Integral announced joining the strikes. Judging by the scope of arrests and repression, authorities took the strike at Grodno Azot most seriously: on October 26th, more than 100 workers were detained and beaten police vans.

Doctors supported the strike with solidarity chains outside hospitals. Many medical workers were arrested, including 9 doctors of the Republican Cardiology Centre paralysing its work.

At the High Technology Park, many employees supported the strike (at least 1000 on the first day). The police used flash grenades and ran around with military weapons.

Many SME owners and workers joined the strike, including mobile operators, most of them were repressed by the security forces throughout the week.

On October 27th, the second day of the strike, theatres joined, entailing brutal repression, mass layoffs and cancellation of shows.

On October 26th, the 4th march of pensioners and students was held, mustering a significant crowd.

Only on the first day of the strike, 460 people were arrested, many were laid off, and students expelled.

During the week, Tsikhanouskaya kept in touch with the striking collectives, and with local communities.

Last week, the Interior Minister and Lukashenka urged the security forces to strengthen the response to unauthorised protests. On October 30th, Interior Minister Karaev and KGB head Vakulchik were released from their duties and appointed as Lukashenka’s aides in Hrodna and Brest accordingly. The Belarusian strongman said literally the following when introducing the new leaders of the security agencies: “From now on, especially if they are hiding in private apartments, we take no prisoners. If someone touches a soldier (I already said this to the generals), he must leave at least without hands. I say this publicly so that everyone understands our future determination. This is it. We have nowhere to retreat, and we are not going to retreat. Who is ready, we shall act.”

Weekend rallies on the 84th and the 85th day of protests mustered the smallest crowd since the beginning of protests. The march on November 1st entitled “Against Terror” followed the rout from Minsk centre to the burial place of those killed by the NKVD near Kurapaty, just outside the Minsk ring road. The march was violently suppressed (like on October 25th) using special equipment, button rounds and flash grenades.

To justify repression against peaceful protesters, the authorities claim to be reacting to interdict intentions rather than actions, however as usual they provide no evidence of the alleged intent.