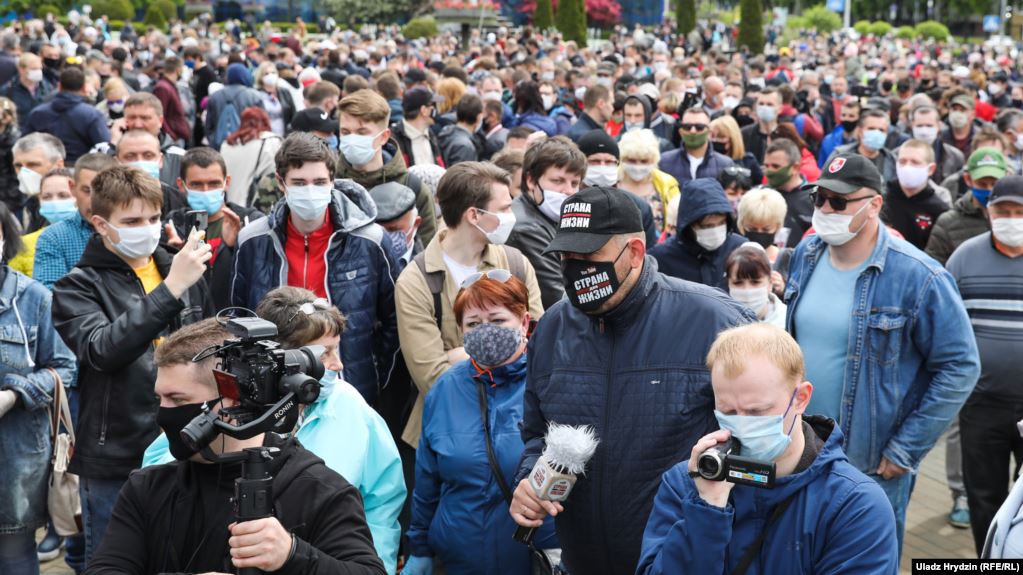 The Central Electoral Commission (CEC) has registered 15 initiative groups, some 40 bidders have been screened out, including Statkevich’s protest candidates. Potential presidential nominees started collecting signatures and communicating with the media. Protest candidates have held the first rally, gathering crowds in the center of Minsk and demanding Lukashenka’s resignation.

The CEC has not registered initiative groups of almost all Statkevich’s protest candidates. Statkevich himself, a presidential candidate in 2010, and a former political prisoner was also screened out, just as his wife Maryna Adamovich. Among 36 protest candidates, only Uladzimir Niapomnyashchykh, a long-standing UCP activist, was able to register his initiative group. He is also the most senior bidder, one year older than Lukashenka.

Siarhei Tikhanouski, a blogger from “A Country for Living” telegram channel, was also screened out. He joined the protest candidates and at the time of the registration of initiative groups he was placed under administrative arrest. Meanwhile, the CEC has registered the initiative group of his wife, Sviatlana Tikhanouskaya, listing 252 members. Usually, such small initiative groups are unable to collect the required number of signatures (100k), but the first protest picket in Minsk was very popular.

In addition to Lukashenka, the CEC registered initiative groups of 14 contenders.

Viktar Babaryko’s initiative group lists 8905 people. He is an ex-head of Belgazprombank, who quit simultaneously with announcing his presidential bid.

Aleh Haydukevich’s initiative group lists 4058 people. He leads the LDPB, the party previously headed by his father, Siarhei Haydukevich, who participated in the presidential races of 2001, 2006, 2010, and 2015, and always congratulated Lukashenka on his victory.

Andrei Dzmitryeu’s initiative group lists 2402 people. He heads Tell The Truth campaign, which nominated its candidates in the 2010 and 2015 presidential elections, who also unsuccessfully contested the election results in court.

Anna Kanapatskaya’s initiative group lists 1313. She is a former MP and is a UCP member.

Valery Tsepkalo’s initiative group lists 804 people. He is a former ambassador to the United States and a former head of the High Technology Park.

Other registered contenders include Mikalai Kazlou (the UCP), Volha Kavalkova (the BCD), and Yuri Hubarevich (For Freedom) having 120 initiative group members each. They all participated in the primaries organized by the center-right coalition, which aimed to choose a single candidate and failed. The center-rightists have launched a campaign “For Belarus without a dictatorship”, and no longer plan to collect and submit signatures, and urge candidates and voters not to participate in the elections.

Natalia Kisel, Yuri Hantsevich, and Ales Tabolich have 120 initiative group members each. An entrepreneur, a farmer-blogger, and a musician, respectively, they have registered to advance their agenda.

Sviatlana Tikhanouskaya, the wife of Siarhei Tikhanouski, has 252 members in her initiative group. Together with her husband, a popular YouTube blogger at “A Country for a Living” channel, they aim to use the election campaign to organize protests and derail elections with the participation of Lukashenka. They aim to do so with Uladzimir Nepomnyashchikh (100 initiative group members), a pensioner, a member of the UCP, and the only Statkevich’s protest candidate whose initiative group was registered.

Statkevich was preparing his protest candidates since the parliamentary elections. At that time, he allied with Siarhei Tikhanouski, who had over 200K subscribers on his YouTube channel. On the day Tikhanouski was released from custody (the day the initiative groups were registered), 35k people watched his live stream with total views counting some 400K.

On May 24th, Statkevich, Tikhanouski, and Niapomnyashchikh held a rally in the center of Minsk near the Komarovsky market. Volha Kavalkova and Vital Rymasheouski from BCD joined the rally. As reported, some 3000 people participated in the rally at the indoor market, the queue to sign up for Sviatlana Tikhanouskaya’s nomination extended 570 meters. Some spent over 1.5-2 hours to put their signature for her. In three hours, she could have collected some 10k signatures. Those who participated in the rally were unusually relaxed for Belarus; they eagerly gave interviews to journalists. The rally participants expressed their strong determination to block the holding of the presidential elections in 2020 through protests, acts of disobedience, and monitoring. The entire event lasted some four hours.

Viktar Babaryko and Valery Tsepkalo have held press conferences. Tsepkalo started touring the country. Both collect signatures and their activities are widely covered by non-state media. They have received the most media attention as compared with other contenders.

State media and the CEC

The state media have almost entirely ignored the ongoing presidential campaign. TV channels (all state-owned in Belarus) reported once about the designated election date and registration of initiative groups. There were only two reports about the start of the election campaign in the state press. Besides, the ONT TV channel held a “discussion” about the election campaign, which, lasting 20 minutes, managed to avoid mentioning a single name of potential candidates.

In the meantime, the CEC has formed territorial election commissions, consisting of civil servants and free from the opposition.