Amid ongoing protests, Lukashenka reaches out to Putin 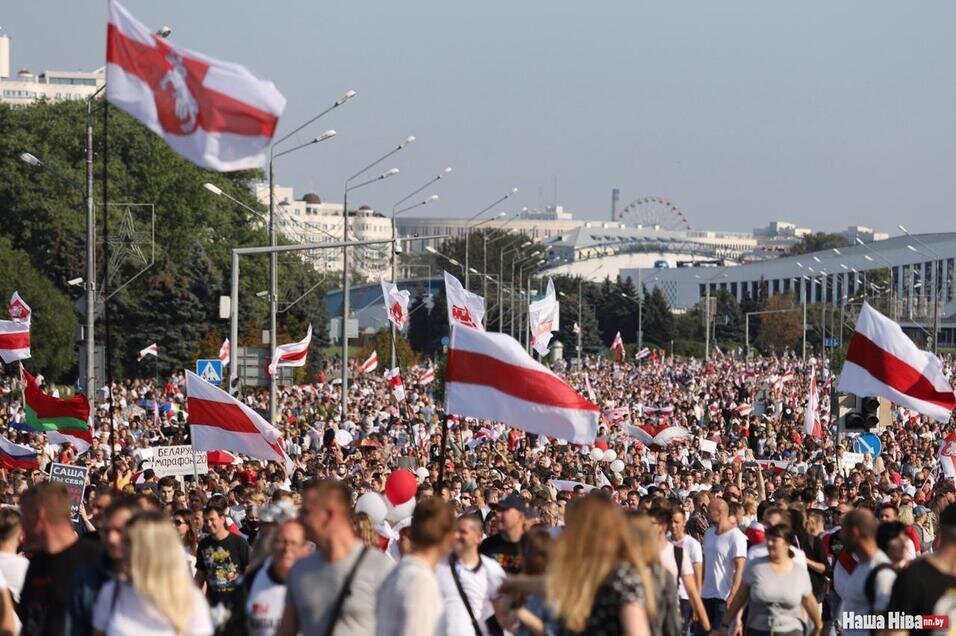 Daily protests continued in Belarus last week culminating in unprecedented crowds on August 30th across the country. Lukashenka ordered heavy military equipment on Minsk streets and reached out to Putin seeking help in suppressing the protests. It is yet unknown what would be the price of such help from Russia and whether Lukashenka would be ready to pay.

For three weeks in a row, the protests in Belarus follow the same pattern – solidarity chains on weekdays and mass marches on weekends. According to specified data, some 200k people marched through Minsk on August 23rd, which was slightly less than a week earlier.

Before August 23rd, Lukashenka mobilized the army to suppress protests in Minsk, but there were no clashes between the army and the protesters. The rally ended with implausible state media footage, in which Lukashenka and his teenage son Nikolai, armed with machine guns, fly by helicopter to defend the presidential palace. It should be noted that Lukashenka no longer risks moving around the capital by car, using helicopter instead to shuttle from one cordoned off-site to another.

Last week, protests continued every day in many cities and towns and their popularity was gradually subsiding, including in Minsk. There were no further developments at striking enterprises amid strikes transforming into ‘Italian’ strikes. Professional communities and labor collectives, especially teachers and doctors held informal meetings. Athletes protested through public appeals, refusals to perform, or performed in T-shirts with the image of the deceased protester Aliaksandr Taraikouski. The police treated meetings of residents to discuss the recall of MPs as unauthorized public gatherings.

The most memorable rally last week was near the Red Church in the center of Minsk when the police pushed protesters inside locking them from the outside. Some 10k women participated in the women’s grand march on August 29th. They forced OMON to run around the city by changing its route many times and breaking through the OMON chains.

The rally on August 30th gathered more people than other post-election rallies across the country, engaging residents of small towns and regional centers. According to preliminary estimates, at least 300k people gathered in Minsk alone. Before the Freedom and Independence March in Minsk on August 30th, Lukashenka brought at least 20 units of heavy military equipment to Minsk and used barbwire and troops to cordon off some state buildings.

The authorities mounted repression throughout the week. Security forces were tasked to halt protests by the weekend. The police arrested protesters, alleged strike leaders, and heads of strike committees. Dozens of local leaders were detained across the country, including in Minsk; among them, members of the Coordination Council Volha Kavalkova and Sergei Dyvlevsky (the leader of the strike committee at the Minsk Tractor Works, MTZ), coordinators of the strike committees at the Belarusian State University, Belaruskali, MKZT, MTZ, and other enterprises, coordinators of the initiative on recall of MPs. In total, at least 400 people were detained between August 24th – 29th.

Last week was also marked by targeted repression against journalists – law enforcers explicitly detained people with microphones and cameras. On August 27th, security officials detained 50 journalists, demanding to delete any footage, and threatening to damage professional equipment. Most journalists were later released, but on August 28th, over a dozen of foreign journalists, including Russian ones, had their Foreign Ministry accreditation revoked and non-Belarusian nationals deported.

Lukashenka persistently reached out to Putin requesting help in suppressing protests. Putin promised to help but said that protesters had to attempt seizing government buildings first.

So far, not a single criminal or administrative investigation was launched further to reports about the torture and beatings of participants in post-election protests. On the contrary, several criminal charges were launched against those who complained about police actions. Within the criminal charges against the Coordination Council, all five members of the Presidium were questioned by the Investigative Committee, including Pavel Latushka, Maria Kolesnikova, Svetlana Alexievich, Maxim Znak, and Lilia Vlasova. Additionally, the authorities threatened with criminal liability the initiative groups for the recall of MPs. All in all, the authorities make a victim of themselves in current circumstances.

Another trend last week was that all those who directly or indirectly publicly condemned violence were laid off. Some state officials publicly upheld the violence, allegedly, in response to senior officials’ demands and Lukashenka personally.