Amid mounting repression and protests that show no sign of abating, the Belarusian authorities pretend to initiate dialogue 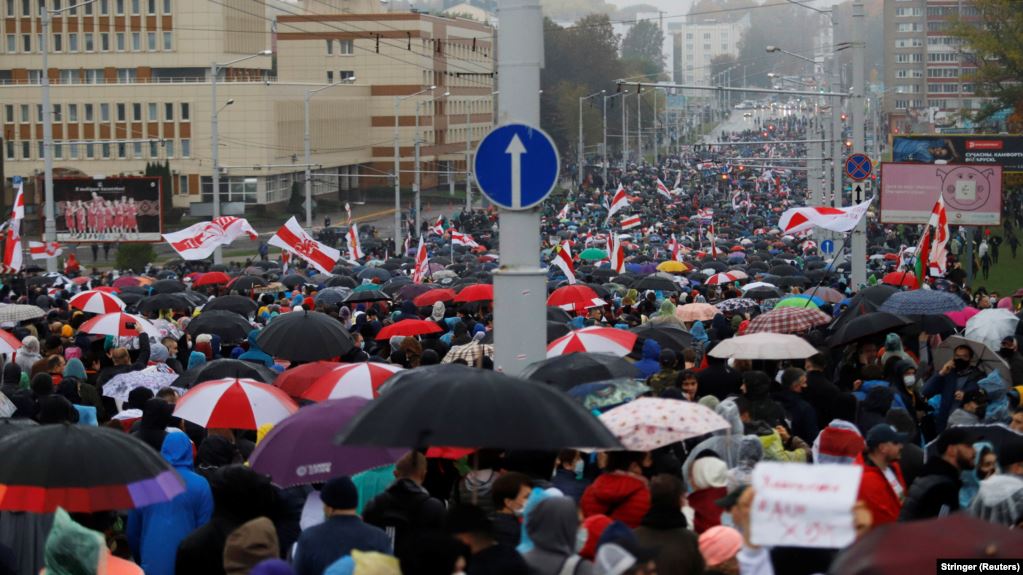 Protests continued last week: from the pensioners’ march on Monday to the March of Honour on Sunday, whilst numerous activists and journalists were arrested across the country. Daily local rallies and concerts in city districts are gaining in popularity bringing hundreds of participants to the streets. The president visited the KGB detention centre to imitate the appearance of dialogue with the arrested opposition leaders but stated that the details would not be disclosed. Late Sunday evening two of those present at the meeting were released on a pledge not to leave town.

Workers of MTZ, MKZT, and Naftan released video appeals to workers across the country. Many athletes supported their repressed colleagues and spoke out against the violence and election fraud. Over 800 artists and culture workers signed an appeal denouncing the violence and rigged elections.

People continued to gather for local events in their residential areas and their number is growing, sometimes reaching 1 000 participants. Intellectuals, musicians, and politicians (for example, Andrei Dzmitryeu and Anatol Lyabedzka) took part in such meetings. The security forces were unable to respond promptly to freedom and historical national symbols mushrooming in residential areas, hence often such decorations and flags remained in place for days.

On October 11th, the 10th Sunday, March took place on the 64th day of protests. Despite the bad weather, the city blocked by the security forces and heavy-handed crackdown, tens of thousands people participated in the March throughout the country.

Mass arrests of civic activists and journalists continued, with the latter facing administrative charges for the participation in unauthorized rallies.

On October 11th, security forces carried out a punitive operation against Belarusian citizens, like the one on August 9th – 12th. Numerous military equipment, including an armoured personnel carrier with machine guns, was brought to Minsk in the morning on October 11th. From noon, nine metro stations were closed, all intersections near and around the Minsk centre were closed, mobile internet was shut down and record-high numbers of various paramilitary uniformed servants were deployed.

Before the rally, at least 40 journalists were detained, including those working for Belarusian and Russian media. It was later reported 14 of them would face administrative trials.

Some security forces had firearms and did not hesitate to direct them at people; at least two cases of the shooting were reported. Water cannons, paint cannons, stun grenades, tear gas, paintball guns were used against the protesters. Some protesters were hospitalized. There were also reports of explosions near the Planeta hotel in the centre of Minsk.

Judging by the preliminary coverage by the Russian media, “Molotov cocktails” were anticipated to be used by the protesters. However, security forces did not wait for the allegedly planned provocations and started using special means against peaceful protesters. The number of those wounded by security forces during the Sunday events is still unknown.

The brutal crackdown on peaceful protesters was also reported from Hrodna, Brest, Zhodzina and other cities.

Last week it became known that Sviatlana Tsikhanouskaya was put on the criminal wanted list in Russia with reference to the common Belarus-Russia police database. Neither Belarus nor Russia announced, however, what the formal charges were.

Amidst Tsikhanouskaya’s meetings with the leaders of Germany, France and Slovakia and her address to the French Parliament, the current president on October 9th said, that he saved her life and responded to her appeal to him by facilitating the escape from Belarus to Lithuania, granting her with USD15k in cash.

Last week, Tsikhanouskaya appointed her representatives on various matters. For example, on October 5th she appointed Anatoly Lyabedzka and Miachyslau Hryb as her proxies on constitutional reforms. On October 6th, however, Lyabedzka was detained and sentenced to administrative arrest. Most members of the Tsikhanouskaya team are currently outside Belarus.

On October 10th, the current president held a ‘roundtable’ discussion with political prisoners allegedly in the KGB detention centre. Participants in the meeting included Viktor and Eduard Babaryka, Liliya Vlasova, Kirill Badei, Sergei Dobrolet, Ilya Salei, Maxim Znak, Vitaly Shklyarov, Dmitry Rabtsevich, Aleksander Vasilevich, and an unknown person (possibly Siarhei Tsikhanouski), all without handcuffs. Torture, if used against the participants during the meeting, was not featured in the state media reports. The state media portrayed the meeting as the beginning of the dialogue with society on constitutional reforms and the Belarusian strongman demanded that the meeting participants removed the protests from the streets.