The 2020 presidential election aftermath: escalation of violence by the police amid swelling protests 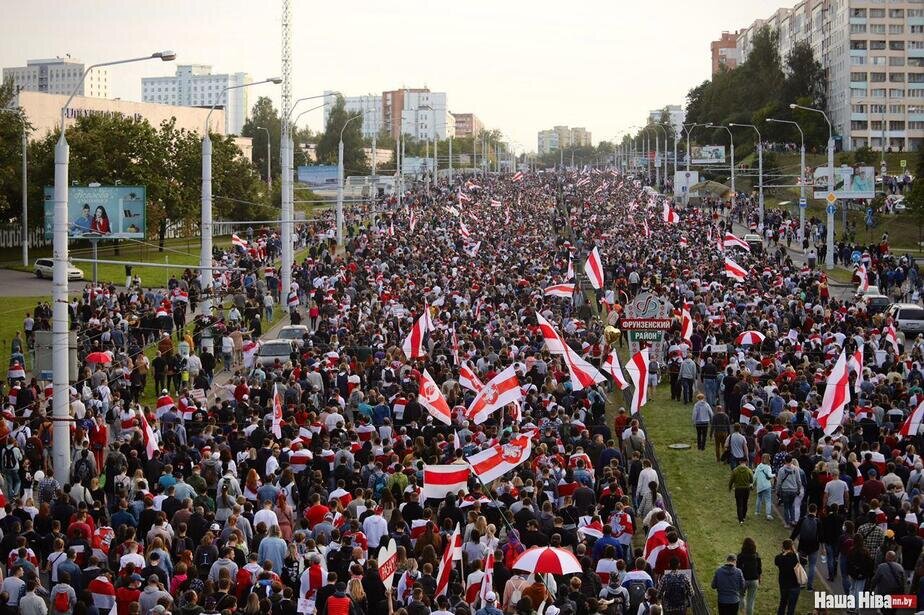 Protests in Belarus have continued and spread to residential areas as security forces step up pressure on dissent, including brutal detentions of women. Last week, security forces detained some of those organizing local activity in residential areas and expanded the practice of bringing administrative and criminal charges against participants in public rallies. The March of Heroes on September 13th and the Saturday Women’s March on September 12th reaffirmed people’s determination and commitment to their demands.

Last week, protests spread to residential areas, following the example of the ‘Square of Changes’, where residents painted a mural on a power distribution unit (PDU) and gathered for small celebrations every night for several weeks. Such local rallies and gatherings points sprang up in many residential areas of Minsk and across the country. In some areas, residents also painted murals, in others – used white-red-white symbols as decorations.

On September 10th, a Belaruskali employee handcuffed himself in a shaft 300m below the ground level to protest the administration’s failure to comply with the strikers’ demands. On September 12th, Belaruskali workers announced an ongoing strike in response to the court ruling of September 11th that the strike announced on August 17th was illegal. On September 13th, yet another representative of the strike committee was detained.

More than 2,000 students and teachers at the Minsk State Linguistic University, where riot police brutally detained students on September 1st, condemned the inhuman actions of security forces. More than 2,500 graduates of the MSLU also supported them.

The Association of Football Players joined the statement by prominent Belarusian sportsmen condemning the violence and the falsification of elections.

Daily protests near the Red Church (the Catholic church on the Independence Square) continued, with protesters also demanding to allow the head of the church, Kondrusiewicz, to return to Belarus.

The Women’s Saturday March on September 12th counted some 10k participants. The new development was that unlike before the police harshly detained and used violence against its participants. Participants, in turn, attempted to rip off face masks from riot policemen.

Besides, last week, so-called Cyber_partisans, who previously hacked websites of the MIA academy, Belarusian Lotteries and some state organisations, issued an ultimatum: if peaceful protesters were arrested on September 13th, they would hack the Ministry of Taxes and Duties and/or block the accounts of the regime’s supporters.

The March of Heroes on September 13th marked the 35th day of the protest and counted some 100k participants in Minsk alone, with marches happening in regional and district cities. The March of Heroes changed its usual route and attempted to reach Drozdy, a residential area of the Belarusian establishment. Riot police started detaining people in different parts of the city before they even reached the gathering point. At the destination point, near Drozdy, riot police used flash bangs for the first time since the events of August 9th-11th. In Brest, the police used water cannon to disperse the ‘singing and dancing crowd’.

Last week, security forces detained people daily, some 50 to 100 people per day on average, including journalists, activists of strike committees, and former functionaries of the regime who switched sides (for example, a former leading journalist in the presidential pool Semchenko). Healthcare workers published a document, listing injuries treated in patients in hospitals on August 9th – 23rd.

Demands are becoming ultimatums as the commitment of the protestors galvanizes in response to the actions of the security forces.