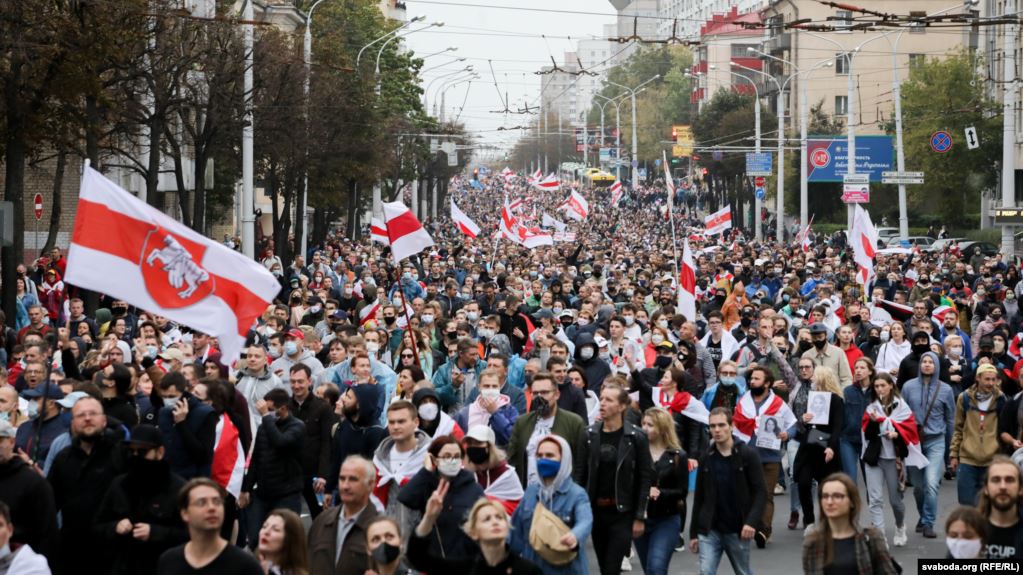 Mass public protests of people discontent with the presidential election results of August 9th have been ongoing in Belarus for seven weeks. In terms of scale, protests have somewhat decreased, whilst repression – consistently increased.

On September 21st, the prosecutor’s office issued 140 official warnings in connection with the participation of children in the protests and Deputy Prime Minister Petrishchenka promised to ‘provide legal assessment’ of such facts. On the same day, another Belaruskali miner refused to leave the mine in protest to police violence and rigged elections. He and 21 locals who came to support him, were briefly detained by the police.

On September 23rd, the inauguration ceremony was held in Minsk, the information about which was disclosed only after it started. To this end, spontaneous protest actions took place in several districts of Minsk and some regions, being harshly suppressed by security forces. In Minsk, near the “Minsk-Hero City” monument, security officials used water cannons to disperse protesters, and later that evening, teargas was also reported as being used against some protesters. People also reported hearing explosions, allegedly, from stun grenades. There were clashes between protesters and security forces near the Pushkinskaya metro station. The human rights centre “Viasna” reported about some 300 persons being detained throughout the country on September 23rd. On the next day, the Interior Ministry said, 364 persons in total were detained, of which 320 were awaiting trial.

On September 26th, the Peoples’ Friendship Park hosted a marathon “The Freedom Run” in support for political prisoners Maksim Znak and Ilya Salei. Later, the traditional Saturday Women’s March took place. Both events were harshly dispersed and over 200 people were detained.

On September 27th, protest activity reached a crescendo. According to some estimates, the Sunday, March, entitled “The Real Inauguration” gathered more than 100k people in Minsk alone. Security forces closed the centre of Minsk, including eight metro stations. According to the Interior Ministry, some 200 people were detained across the country.