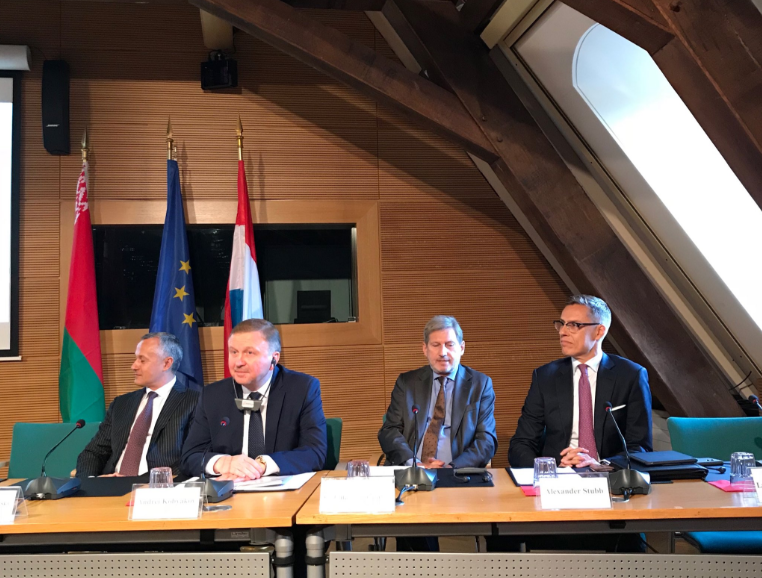 The extension of the suspension of US sanctions against Belarusian enterprises, the participation of the Belarusian Foreign Ministry in the Eastern Partnership Civil Society Forum and the negotiations of PM Kobyakov with Johannes Khan testify there is an active dialogue ongoing between Belarus and the West. Moreover, the Belarusian authorities seek to deepen and expand this dialogue.

On October 24th, the US extended the suspension of sanctions against nine Belarusian enterprises. As before, this decision will be valid for six months. In October 2015, the United States partially suspended sanctions against nine companies from Belarus (Belneftekhim and its subsidiary in the USA (Belneftekhim USA), Belshina, Grodno Azot, Grodno Khimvolokno, Lakokraska, Naftan, Polotsk Fiberglass). This decision was then extended for six months in April and October 2016.

Belarusian Foreign Ministry representatives for the first time took part in the Eastern Partnership Civil Society Forum, which was held in Tallinn on October 26th, 2017. According to Belarusian Deputy Foreign Minister Oleg Kravchenko, “Belarus is actively participating in the Eastern Partnership, this is the guarantee of improving relations with the EU”. Kravchenko said that clarity of partnership would be a priority. Implemented projects should be specific, clear and visible. The head of the pan-European cooperation department of the Foreign Ministry, Andrei Bushilo, emphasised at the Forum that there were no disagreements in the “Belarusian government about cooperation with the European Union, all departments are interested in improving relations”. During the parallel business forum of the Eastern Partnership, the European Investment Bank announced that in 2018 it could provide Belarus with funds for infrastructure projects.

On October 27th, Prime Minister Andrei Kobyakov met in Luxembourg with the European Commissioner for the European Neighbourhood Policy and talks on the expansion of the EU, Johannes Khan. The meeting was held within the framework of the Belarusian-European Investment Forum. During the talks, Johannes Khan announced that the EU was ready to start the expert work to shape the main elements of a comprehensive agreement on the interaction between Belarus and the European Union. This was the first time an EU official made such a statement. In addition, Kobyakov met with the Prime Minister of Luxembourg, Xavier Bettel.

Overall, both, Minsk and the West are ready to continue and deepen cooperation on a wide range of topics. The EU is ready to discuss specific investment issues and the preparation of a basic agreement.