The normalisation policy with the West brings fruits, but the inertia of isolation still dominates 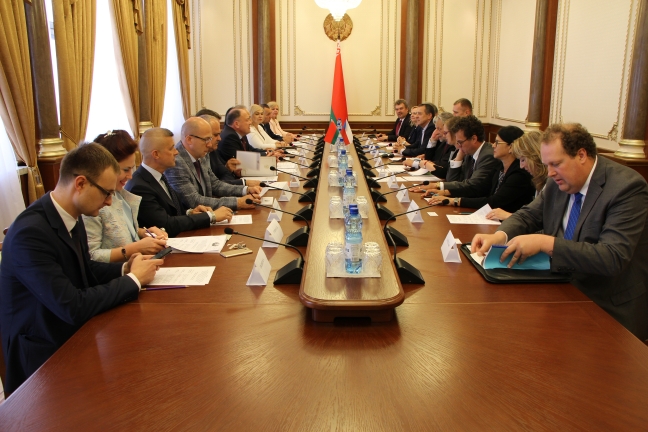 Minsk’s consistent and purposeful efforts to improve political and economic relations with the West continue to pay off.

Last week, the Czech Republic resumed parliamentary relations with Belarus. On June 4th – 7th, Minsk hosted a delegation of Czech Senators led by the chairman of the Senate’s Committee for Foreign Affairs, Defence and Security, František Bublan. According to him, parliamentarians attempted to advance political achievements and to give momentum to bilateral economic relations. The Czech Republic is among the twenty major trade partners of Belarus. In 2017, bilateral trade turnover between reached USD 290.2 million.

On June 7th, media reported that Perkins, a British company, intended to start supplying engines for the largest Belarusian machine-building enterprises. Currently, negotiations are underway with BelAZ, Gomselmash, MTZ, and other Belarusian producers.

Meanwhile, the inertia of the previous isolation policy with its outdated legal framework is in direct conflict with current political trends. For instance, as regards American sanctions against Belarus, according to the White House press service, on June 9th, President Trump extended for one year sanctions against some Belarusian citizens and members of the government. Sanctions were imposed after the presidential elections in March 2006 due to actions and policies of some members of the Belarusian Government and other persons, which undermined democratic processes and institutions in the country. According to the current US legislation, sanctions are extended in the case the “threat to national security and US foreign policy” retains.

The Belarusian Foreign Ministry responded negatively but reservedly to the extension of sanctions, noting that Washington “yet has been unable to revise its outdated policy towards Belarus”, but at the same time confirmed Minsk’s interest to continue constructive cooperation with the United States.

Belarus is slowly but confidently restoring political and economic relations with Western states after a long isolation. This process is going at a faster pace and brings better results with some states (Czech Republic, Austria, Great Britain), but with other states and alliances, where political decision-making is more complex, the normalisation is hampered by institutional and legal inertia.