At the All Belarusian People’s Assembly: the flags of two states 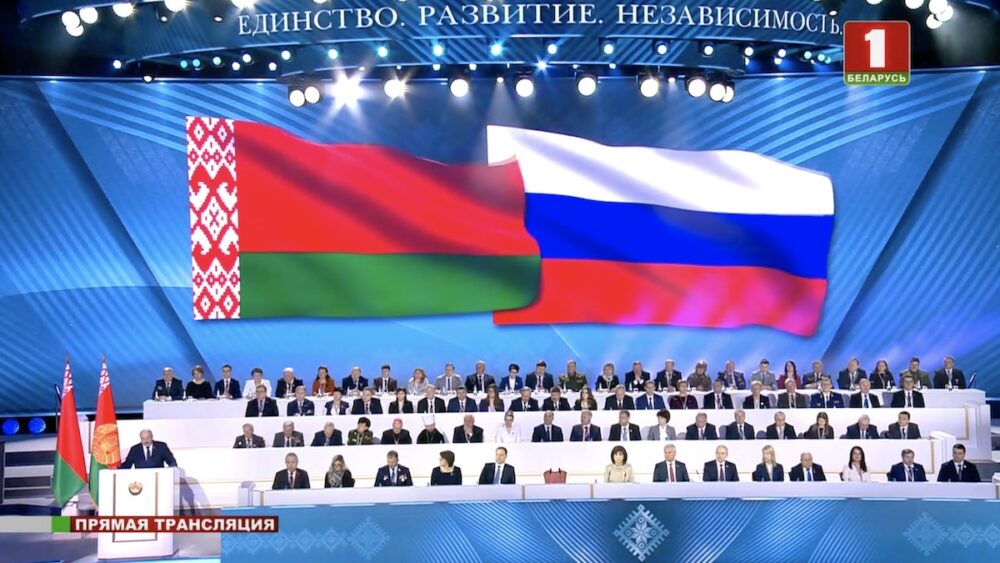 Two flags bestrode the stage at the All-Belarusian People’s Assembly; that of the Belarusian state and that of Russia. References to foreign policy alignment with Russia permeated all speeches, with relations with the wider international community relegated to “actions on the external circuit.”

The All-Belarusian People’s Assembly was held under the spectral shadow of conflict with internal and external enemies, to be met by oaths of allegiance to Russia. Following the Assembly, Russian Ambassador Mezentsev reciprocated, emphasising the strategic nature of cooperation between Belarus and Russia and the inseparability of their shared fate.

Meanwhile, Lukashenka noted several areas in which Belarus intends to maintain its independence. In particular, this will be the case regarding relations between the state and private business where the state plans to retain unlimited powers to regulate trade, confiscate income and expropriate property. Lukashenka also decided to postpone Constitutional reform issues until the end of the year, despite Russian representatives continually raising the topic.

Belarus maintains the same preconditions for proceeding to the next stage of the “union state” project: equal economic conditions, access to markets and credit. However, if Belarus continues with arbitrary behaviour towards business, equalisation of economic conditions will only mean that the Belarusian state is favoured with preferential prices for energy resources, but not necessarily Belarusian people or enterprises.

For the moment, the Russian media reaction to Belarus refusal to fully abandon an independent foreign policy remains muted.