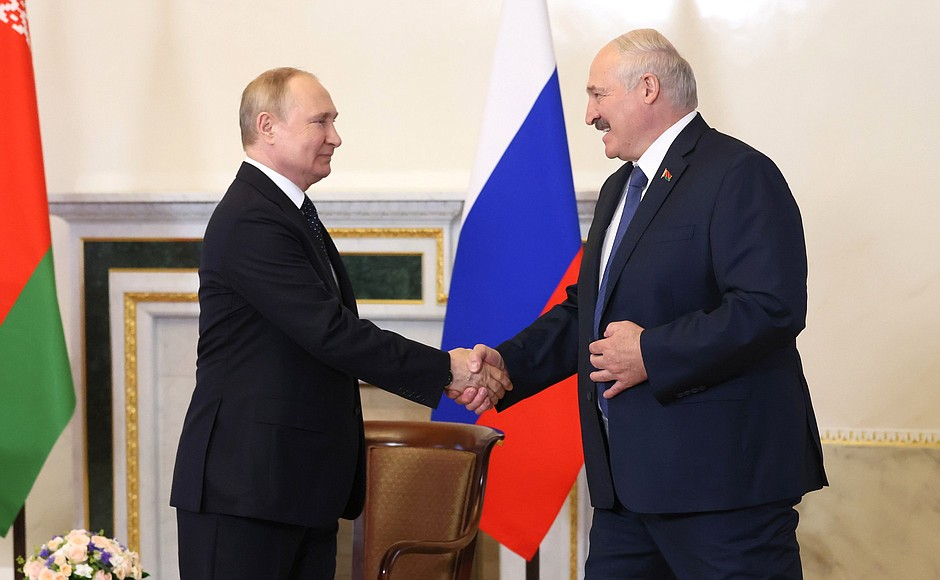 Moscow is slowly dragging Minsk into a broader confrontation with the West. While Lukashenka visited Putin, the Russian military was in charge of Belarusian territory, launching missiles at Ukraine.

On 23-25th June, the self-proclaimed President of Belarus was on a working visit to Russia. Lukashenka and Putin first had an informal conversation in Zavidovo near Moscow, then moved to St. Petersburg, where on June 25th they held a meeting on the “strategic partnership” between Russia and Belarus. Following this, Putin announced that he would shortly transfer to Belarus Iskander M missile systems, capable of fielding ballistic and cruise missiles in both conventional and nuclear versions. The issues of supplying potash fertilisers to foreign markets were also discussed.

The details of the meeting are scanty, as usual, but there are many of rumours and speculations – in particular regarding the possibility of opening a “Belarusian front” in the Ukrainian campaign of the Russian Federation.

While Lukashenka was in St. Petersburg, one of the largest missile strikes of the war was launched at Ukraine. Most of the missiles – more than 40 – flew from the territory of Belarus.

A few days before that, and during the bilateral meeting of the Ministers of Defence of the Republic of Belarus and the Russian Federation the latter stated the need for urgent joint measures to strengthen the defences of the Union State. He believes that this is becoming increasingly relevant, and Russia is ready to provide “any support to [our] Belarusian friends in this.”

According to media reports, Russia is transferring additional new weapons to Belarus. On June 22nd, a batch of S-300 missile launchers and one Pantsir air defence system, was sent to the Homiel region.

Minsk and Moscow are creating a joint group to investigate cases of genocide of the Belarusian people during the Great Patriotic War. A corresponding resolution of June 23rd was signed by the Chairman of the Investigative Committee of Russia A. Bastrykin and prosecutor general Belarus A. Shved.

On June 21-22, the Minsk Dialogue initiative (previously declaring itself independent) and the Institute for International Studies of the Moscow State Institute of International Relations of the Ministry of Foreign Affairs of the Russian Federation with the participation of the Alexander Gorchakov Public Diplomacy Fund held the second “meeting of the Belarusian-Russian expert track”. The event was attended by a number of experts and functionaries, including the Union State Secretary D. Mezentsev and Foreign Minister of the Republic of Belarus U. Makei. The main idea of  of the meeting: North Korea is not so bad. Almost all the participants presented themselves as propagandists of the anti-Western “axis” and often uttered pure nonsense such as, for example, the benefits of Western sanctions for the integration between Belarus and Russia.