Window to Europe for Belarus 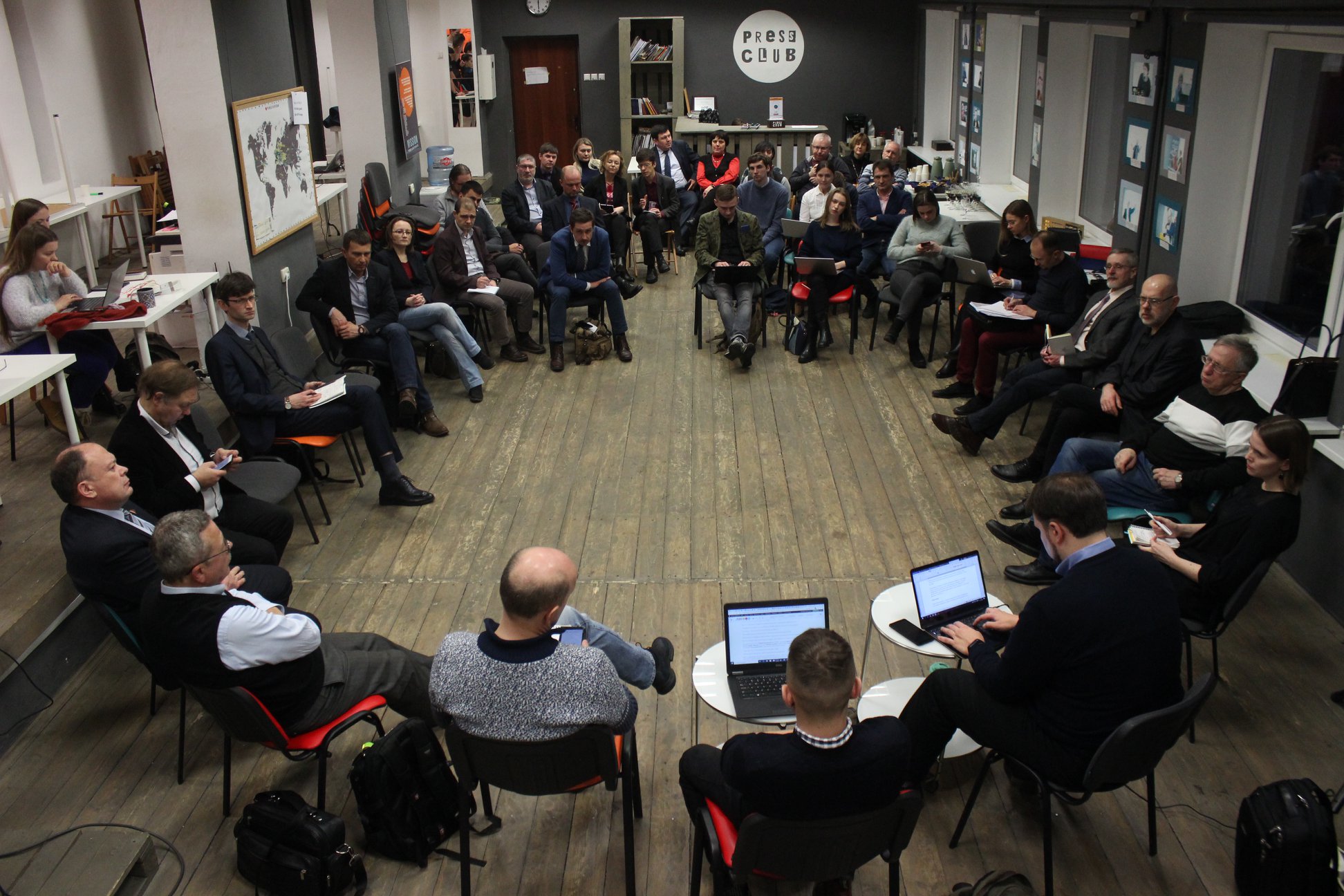 Prospects, barriers and value orientations of the Belarusian Society

On January 22, 2020, Press Club Belarus, the website of Belarus’ expert community of “Our Opinion”, the Belarusian Institute for Strategic Studies (BISS) and Belarus in Focus weekly analytical monitoring held a regular meeting of the Expert Analytical Club to discuss the prospects of Belarus–EU relations.

The main speakers were the representatives of the analytical community and politicians:

Andrei Vardamatski, founder and director of the NOVAK Sociological Laboratory, took part in the discussion on video.

The representatives of the diplomatic corps, analysts and journalists also took part in the meeting.

The participants explored the following issues: 1) How can Belarus overcome its plateau in its relations with Europe and develop relations with it in the future? 2) How not to aggravate but to mend the relations with Lithuania against a backdrop of the launch of Astraviec NPP? 3) Will the status of Belarus as a regional peacekeeper hold on and what is necessary for its revitalization? 4) What does the Belarusian society think about the European path of development?

How the window opens: the successes of Belarus–EU relations

In the last months, one can often hear that Belarus and the EU have reached a plateau in the development of their relations and there is nowhere to progress. The analysts, however, noted that such a situation is not bad in itself.

Andrei Fiodarau believes that “reaching the plateau can only be welcomed,” and if the current plateau will be overpassed, then “we will reach a new plateau a little higher.” And Kaciaryna Šmacina evaluates the plateau as a positive result “taking into account the history of Belarus-EU relations after isolation and sanctions”, and notes, “Now the relations of Minsk and Brussels are at the best level in history.” In her opinion, however, the question remains open of how much political will both parties have so that they can “agree on something, and not just be nice” on the reached level.

Šmacina notes that in these conditions Minsk chooses the development of bilateral relations with the EU countries where it finds the most mutual understanding (in particular, Austria and Latvia) over improving the dynamics of the relations with the EU. The European diplomat who participated in the meeting confirmed that Alexander Lukashenka’s visits to the European capitals are extremely important and help to look optimistically on the prospects of Belarus-EU relations. The media support of these visits helps Europe to get to know Belarus better.

What is hindering the development of Belarus–EU relations?

Firstly, there is a general decline in the EU’s interest in Belarus. EU is more concentrated on its own problems.

Valery Varanetski believes that today the EU is absorbed by its own problems, and the number of problems it is facing is not getting lower. There are difficulties in the relations between Poland, Hungary, and other European countries; there is also the redistribution of forces within the EU because of Brexit. Tatsiana Karatkevich is on the same page: in the East, they are busy with their problems such as the constitutional reform in Russia, and in the West, they are busy with their agenda including Brexit and ecology. She said, “Nobody cares about Belarus”. Karatkevich notes that new European politicians arrive who do not know the history of Belarus-EU relations, “We need to explain everything to them from scratch”. In her opinion, the November visit of the Foreign Ministers of Finland and Sweden to Belarus also showed this.

Secondly, there is also the absence of the basic agreement – not only because of Lithuania blocking the agreement but also because of the aforementioned lack of interest to Belarus.

Valery Varanetsky notes optimistically that the EU would be able to realize the significance of Belarus for itself, but at the same time recognizes that there is an insufficient understanding from EU of the value of the full development of its relations [with Belarus]. Katerina Šmacina adds that although Europe is developing priorities for the development of the Eastern Partnership, there is no visible willingness and political will in the EU to invest additionally in this region.

Thirdly, there is a lack of progress in Belarus.

Tatsiana Karatkevitch underlines the lack of political progress, “The disappointment of the European politicians and the members of the European Parliament in the results of the Belarusian elections and the lack of alternatives,” which may reduce their interest in inter-parliamentary contacts. Katerina Šmacina identifies the situation with democracy and human rights during the 2020 presidential campaign as a future risk factor for Belarus-EU relations, “I would not want Belarus and EU to enter a new round of confrontation, so it is in the interests of the Belarusian authorities to conduct the campaign in a calm manner”.

Andrei Fiodarau draws attention to the lack of economic reforms in Belarus as a constraining factor for the European interests. He notes that because of the economic interests the West is cooperating with China, where the situation with the human rights situation is far worse than in Belarus. And since the Belarusian economy is not reformed either the situation with the human rights or geopolitics and the risks of aggression from Russia dominate.

What can Belarus and the EU get from cooperation with each other?

Valery Varanetsky calls the EU “one of Belarus’ most important strategic partner, and in fact second most important after Russia”. Belarus needs access to the European market, as well as investment and technical assistance from the EU. However, Andrei Fiodarau does not see how the EU could compensate Belarus for losses from the deteriorating relations with Russia, “The EU will not just open its market for Belarus, and it will not supply energy at low prices.”

Fiodarau is also skeptical about whether Belarus might be mutually interesting for the EU, “Our trade mainly consists of the export of oil and petroleum products, but for it is peanuts for the EU”. In addition, there are great differences in values between Belarus and the EU.

In these conditions, Fiodarau assesses the EU’s interest in Belarus as very modest, “Belarus should not create problems.” Therefore, the issues of drug trafficking and human trafficking are jointly resolved. Andrei Parotnikau also emphasizes EU assistance to Belarus in border management and overall security.

However, the European diplomat who participated in the discussion also notes the development of direct flights and tourism in both directions as a point of growth within the bilateral relations. Some other growth areas are the development of renewable energy and energy efficiency in Belarus, which is relevant despite the launch of the Astraviec NPP.

Katerina Šmacina does not see Vilnius’ readiness to make concessions to Belarus when it comes to signing the partnership priorities with the EU: instead, Lithuania accuses Belarus of trying to lobby the safety of the Astraviec NPP in the European structures and the IAEA. She also does not think that Lithuania will put up with the launch of the Belarusian NPP in the near future if there are no special geopolitical threats. Andrei Fiodarau adds that despite the fact that in case of some negative events on behalf of Russia, Lithuania will be the first one to be threatened, this does not affect its determination to disrupt the signing of the partnership priorities.

Belarus as a regional peacemaker: consolidating potential or a propaganda stamp

Valery Varanetsky believes that it will be important to ensure stability in the Eastern European region for the countries “responsible for the future of Europe”, such as Germany and Austria, where their assets are also present. Because of this, the role of a sovereign and independent Belarus, “with its potential for consolidating action”, serving as the point of contact between the EU and Russia (Eurasia) will increase. According to Varanetsky, both Russia and the EU are interested in Belarus’ contribution to the European consolidation, stability, and security of the region.

Andrei Parotnikau is much more skeptical, “Belarus as a guarantor of regional security is a propaganda stamp that has nothing to do with reality. Minsk has already squeezed out everything that is possible on the external sites and continues to operate the brand for domestic consumption. The relations between the West and Russia are not being decided in Minsk.”

Parotnikau also notes that the claims of the official Minsk for playing such a role in the region cannot be separated from the level of Belarus-NATO relations, which is “the lowest of all the CIS countries”. However, it is possible to demonstrate breakthroughs because of the low contractual base between the sides, such as joint anti-terrorism exercises in transport. Such exercises become more actual in the light of the upcoming 2021 IIHF World Championship to be held jointly by Belarus and Latvia.

The mood of the Belarusian society: the pragmatics of the European orientation

Tatsiana Karatkevich noted that Belarus lacks subjectivity in its relations with the EU, in particular – economic independence and political consensus, “[There is no confirmation] that it is not just one person, but the society as a whole want to develop relations in one direction or another”.

Vardamatski acknowledges a cooling of the relations with Russia rather than the improvement of Belarus-EU relations as the reason for these changes. This lead not only to the changes in the media portrait (both of non-state and state-owned media) of the relations with Russia but also to the growth of the labor migration of the Belarusians who are increasingly changing their migration destination from the East to the West. As a result, “Everyone who had left the country before and then came back turns into a ‘small radio station’ that broadcasts positive information about Europe to his or her small social group.”

As a result, for the first time ever, the sociologists recorded the dominance of the pro-European views not only among Belarusians who are 18-24 years old but also in the older group – those who are aged 25-34.

A qualitative part of the sociological study records the predominance of the material/pragmatic approach in the pro-European orientation of the Belarusians and the prevalence of the value-based and mental approach in the pro-Russian orientation. Vardamatski explains it this way, “If Europe went to Belarus then its values ​​would go too. Meanwhile, Belarusians go to Europe for the wellbeing”.

Tatsiana Karatkevich agrees with this, “The value orientations on the pro-European agenda have not yet been formed”. Belarusians travel to the EU for the quality of life. They don’t take value-based responsibility at home and do not carry it after moving to the EU. However, Karatkevich believes that this can change because of the existing EU policy of soft power: increasing the visibility of the EU projects in Belarus can also form value orientations related to the partnership with the EU.

Originally published in Russian at Our Opinion

Read more
Joint ventures and energy roubles. Spontaneous improvisations Annual review 2017: civil society and political parties moved beyond the oppositional agenda Parties hardly managed to mobilise their activists for the elections, and green initiatives have gained popularity in the confrontation with investors
You have been successfully subscribed