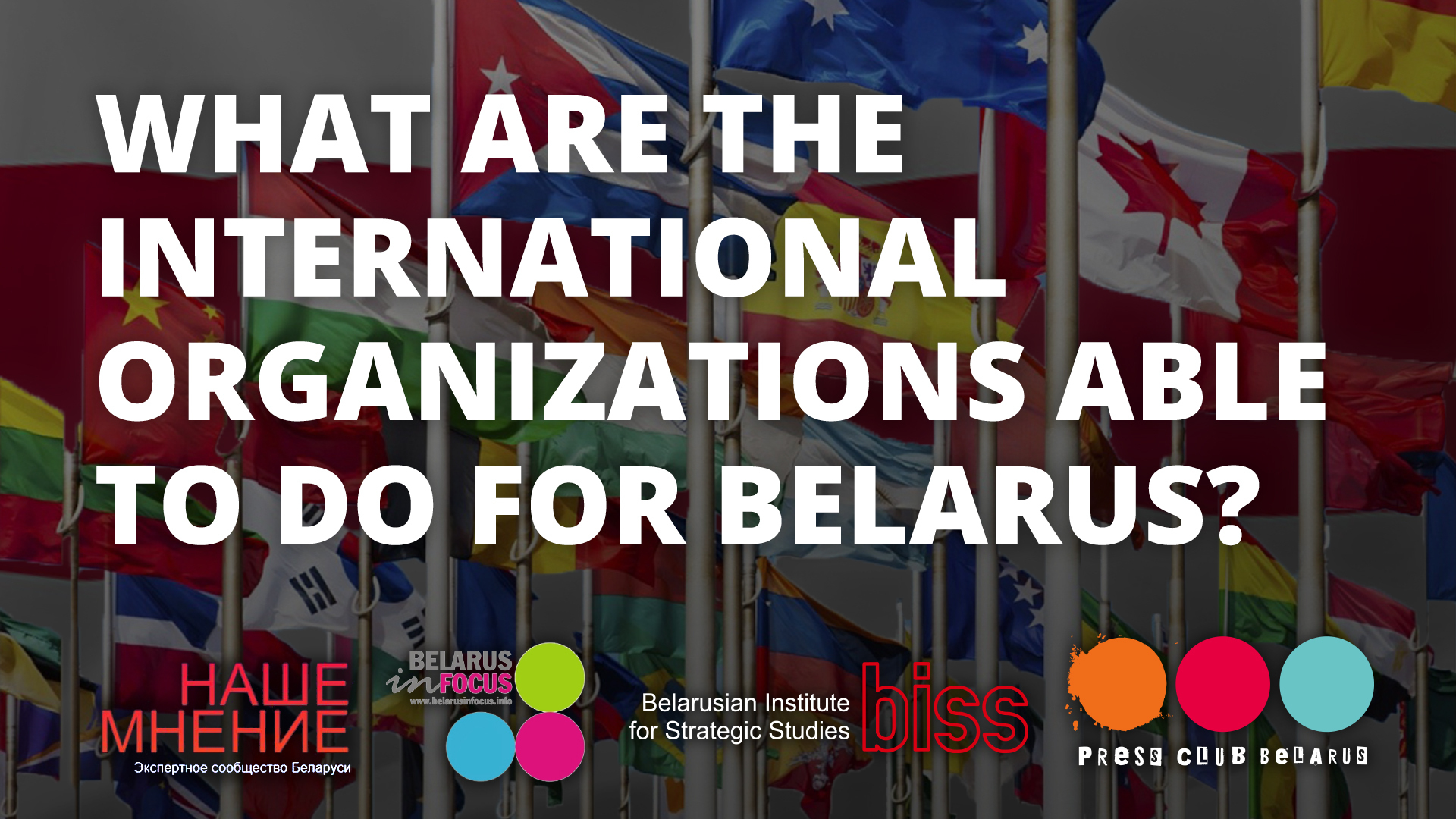 “In such human rights cases, the accused often find themselves in the dock after retirement, many years after the crimes took place when they would prefer to be spending their twilight years in peace with their grandchildren.”

On 27 May 2021, the Belarus in Focus weekly analytical monitoring team, in partnership with Press Club Belarus, the “Our Opinion” Belarusian analytical website and the Belarusian Institute for Strategic Studies (BISS), held an online Expert Analytical Club seminar to discuss the opportunities for international organisations to influence the situation in Belarus.

The main speakers were researchers, human rights activists and lawyers:

Representatives of international organisations and the diplomatic corps, analysts and journalists also took part in the meeting of the expert-analytical club.

Highlights of the discussion

NB: “Chatham House Rules” were employed, so some quotes are unattributable.

As Belarus is not a member of the Council of Europe, the UN is the only available specialised human rights mechanism. However, there is no chance of the UN sending blue helmets to intervene in Belarus. The UN is not a world sheriff, just the sum of its parts; nation-states, not all of which are democracies. UN resolutions are, unfortunately, regularly ignored.

As a body recognised by the whole world, the primary function of the UN is to conduct impartial proceedings, provide assessments, and characterise things as they really are. While the language of national human rights activists matters, it is the conclusions of the UN that have a material effect and can trigger other mechanisms to protect and compensate victims.

In addition to a special rapporteur, a human rights team has been set up by the UN High Commissioner for Human Rights to investigate the human rights situation in Belarus from May 2020 onwards. The team of eighteen are based in Geneva, led by lawyer Karina Moskalenko, with a mandate to record reports of torture according to the international methodology.

Not all UN countries are represented on the Human Rights Council at any one time; a rotating list of forty-seven countries are appointed by the general assembly. The current membership includes Russia, Uzbekistan, Pakistan, Eritrea and Venezuela, all of whom have a weak human rights record and are liable to take positions motivated by other considerations.

In theory, the UN can do much more; the UN charter empowers it to organise ad hoc criminal tribunals. However, in practice, the permanent members of the UN Security Council (which includes Russia and China) can veto almost any decision.

Over the past twelve months, the subject of Belarus has been discussed by the UN Security Council on three occasions. Two informal (“Arria formula”) meetings took place in December 2020 with the participation of Sviatlana Tsikhanouskaya and in January 2021 (on freedom of the media), both at the request of Estonia. A third meeting was convened behind closed doors in the wake of the Ryanair hijacking, and since this constitutes an international incident, some action is to be anticipated.

The UN International Court of Justice

One of the most underutilised UN institutions is the International Court of Justice. Founded in 1946 as the most authoritative international judicial body, it has considered only two hundred cases over its lifetime. Leaders of European countries are already contemplating possible action against Belarus via this route. As the suit filed by Ukraine against Russia in 2017 shows, Russia’s status as a permanent member of the UN Security Council does not provide a veto, though protestations are ongoing.

The initial step is to demand that the internal judicial systems deliver justice. If this fails, the next step is arbitration, and if there is still no progress, the matter is referred to the UN Tribunal of the International Court of Justice. Failure to implement decisions of the court is a violation of the UN Charter. This process can be initiated as early as summer 2021 if a state musters the political will and legal resources, but the process will be drawn out over many years.

The airliner hijacking case presents an opportunity to initiate such a process since it is a clear violation of the Chicago Convention. Historically, countries usually choose to reconcile and arrange compensation bilaterally; however, there is no precedent for a breach of precisely this nature. In the absence of bilateral progress, the first formal step is to refer the matter to the international civil aviation organisation (ICAO). Such discussions have already commenced.

The Council of Europe, PACE and the ECtHR

The seminar participants noted that the Council of Europe has been sclerotic in its approach to the Belarusian crisis from the start. The Parliamentary Assembly (PACE) nominated a rapporteur on Belarus, and several ideas were discussed, but there has been no concrete action to date.

This is because the Council of Europe is “a gentleman’s club regarding human rights, and respect for them is checked at the entrance, ” so there is no compulsion mechanism. The primary sanction is expulsion from the organisation, but this is ineffective in the case of Belarus since it is not a member.

However, Belarus is a signatory to some conventions of the Council of Europe, such as the Belarusian Constitutional Court participating in the Venice commission process, which, though not a court, is an authoritative body of experts who deliver opinions on constitutional law matters.

Although the European Court of Human Rights only has jurisdiction over Council of Europe member countries, Belarusian citizens can petition the court regarding cases that involve a member state. In the case of the Ryanair hijacking, a human rights violation case can be filed against Poland because that is where the aircraft is registered. It is obviously inappropriate to “blame” Poland for the unilateral actions of the Belarusian regime, but this legal fiction has been used before, such as when Moldova was found liable for human rights violations in Transnistria.

The Organisation for Security and Cooperation in Europe

The OSCE functions by consensus. The strength of this approach is that once an agreement is achieved, implementation is straightforward, but getting to this stage can be difficult, especially when countries such as Russia or Turkmenistan are involved and challenge the standard framework or devise their own interpretations.

The Moscow mechanism, which can be launched without consensus, has already been invoked concerning Belarus, leading to Wolfgang Benedek’s fact-based report on human rights violations, which reached firm conclusions and made clear recommendations. However, this is a technocratic mechanism based on the legal position and accurate characterisation of offences; concrete remedial or mitigatory action requires an additional political dimension.

The International Criminal Court in The Hague

Although Belarus has not signed the Rome Statute and is therefore outside ICC jurisdiction, there is already a precedent in the case of Myanmar, which is under investigation despite not being subject to ICC jurisdiction. Thousands of people who fled Belarus in fear of persecution are now present in territories subject to ICC adjudication, such as Lithuania, Poland and Ukraine.

The ICC is designed to consider cases against “prime movers”, such as the highest echelons of the Belarusian government. Middle level and junior functionaries are generally dealt with by more appropriate courts of universal jurisdiction.

Certain countries assert universal jurisdiction for certain crimes. On this basis, cases have already been filed in Lithuania, Poland, and Germany, and NGOs are liaising with prosecutors in several other countries. The precise procedures vary according to the legislation of the prosecuting country and generally requires the physical presence of the accused; however, this is not the case for Lithuania, and Germany has prosecuted Syrian officials for torture in absentia.

Prior cases involving events in Ukraine and Georgia demonstrate that robust evidence is required for a successful torture prosecution, which, in the opinion of the discussion participants, makes the ByPol initiative highly significant. Drawing support from activists and former Belarusian security forces, ByPol is in a unique and unprecedented position to supply hard evidence of criminal conduct.

The prospect of individuals being held personally to account for abuses, including judges and prosecutors who preside over politically motivated show trials, can act as a brake on repression. Lower level regime functionaries are more vulnerable to capture and are more likely to be subject to first-hand evidence of wrongdoing.

If a court asserting universal jurisdiction issues an arrest warrant, then the accused is at risk of detention and asset sequestration in over half of the countries in the UN. It is perfectly possible for a member of the Belarusian riot police travelling on vacation with his family to be detained by Georgia based on a German arrest warrant. There is no statute of limitations regarding these offences. A warrant issued today could be enforced decades from now. In such human rights cases, the accused often find themselves in the dock after retirement, many years after the crimes took place when they would prefer to be spending their twilight years in peace with their grandchildren.

The limitations of international mechanisms

The debaters all noted that sovereignty is the cornerstone of all international relations, so international mechanisms are geared towards cooperation rather than coercion.

Unfortunately, the Belarusian regime has a long history of ignoring international protests and decisions of the UN Human Rights Committee etc. The hijacking incident has highlighted this on the global news agenda, but their handling of the incident and its aftermath is no surprise to seasoned Belarus watchers.

That said, mechanisms exist to exert pressure and influence in an international context. Public opinion makes human rights a factor in economic and business relationships, so a country that persistently defies international norms inevitably loses out on trade, transhipment and investment opportunities. Unlike sanctions, this cannot really be characterised as political pressure; businesses just make pragmatic decisions about risk, instability and the “brand safety” aspects of being associated with a widely reviled regime.

Read more
Belarusian military-industrial complex’s ambitions rest on the lack of funds An ultimatum strategy prevails for civil society and democratic forces Implementation of the oil agreement has resumed; the Russian Orthodox Church broke up with Constantinople in Minsk
You have been successfully subscribed