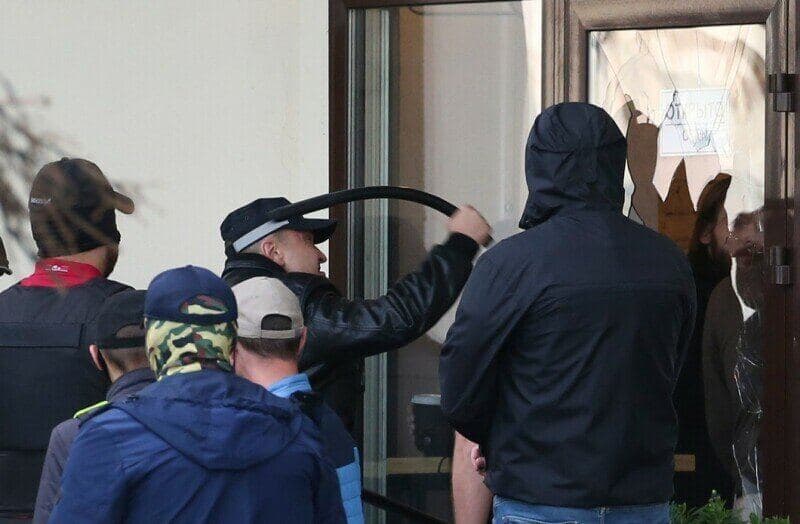 The Belarusian leadership is intensifying its confrontational rhetoric about “mobilisation” as Lukashenka makes trips to the regions and warns about the possible introduction of martial law due to Western sanctions. The contradictions inherent in the regime response indicate a severe imbalance in the state apparatus, with the influence of professional managers and technocrats diminishing, particularly concerning political decisions.

The protracted political crisis and collapse of confidence in state agencies have left the Belarusian Orthodox Church as one of the few public institutions retaining wide respect and influence. Consequently, together with Hrodna regional leadership representatives, Lukashenka visited a monastery in Žyrovičy, Hrodna region to shore up support.

However, Lukashenka’s rhetoric also presages further restrictions on civil liberties, up to and possibly including the declaration of a state of emergency and martial law.

For the first time since 1999, there will be no Independence Day parade in Belarus. This decision may be linked to the allegations from the Russian FSB that the “Feduta conspiracy” planned to assassinate Lukashenka during this event.

Preparations continue for constitutional changes that include measures to reduce the electorate’s participation in the political process. The draft bill “On changing the Constitution of the Republic of Belarus” has passed on first reading and envisages a single day of voting to elect representatives at all levels. Consequently, either local council elections will have to be postponed or parliamentary elections brought forward, or both.

While forced to respond to economic sanctions with contradictory measures, the Belarusian leadership continues to try to create schisms in the protest movement. Raman Pratasevich and Sofia Sapieha were again paraded on the state news service before being transferred from remand detention to house arrest. This development is variously interpreted as a reaction to sanctions or possibly a strategy to further demoralise the protest movement.

As a further step in controlling commentary, the authorities are trying to delegitimise the independent analytical think tanks. The Ministry of Justice has filed applications with the Supreme Court to de-register and liquidate the “Strategia” think tank and the Belarusian Association of Women Lawyers.

The government continues to attempt to shore up its finances by expropriation of private businesses and associated measures such as launching the first criminal prosecution for evading insurance premiums. Security forces have also detained Pavel Matusevich, co-founder of the online store “21st Century”.

State functions continue to deteriorate due to the diversion of resources to repression, most recently demonstrated by a mass power outage in Mahiloŭ, Viciebsk and 717 surrounding settlements due to an accident at the Lukoml hydroelectric power plant.