Annual review 2017: a subtle request for updates in the institutional design of power 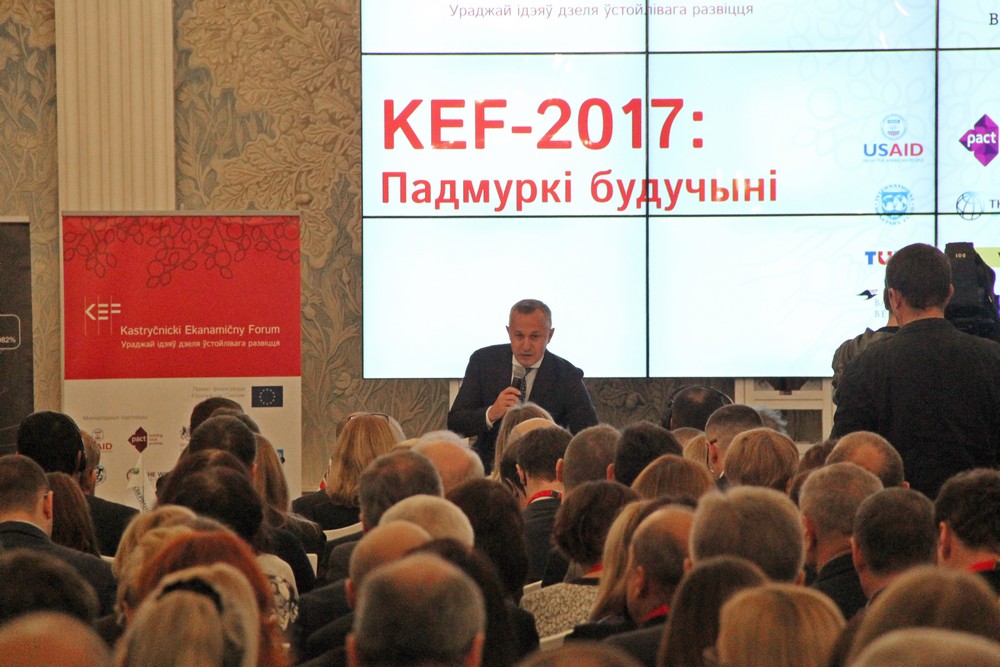 A potential split in the ruling elites, which manifested itself in public rivalry and disputes among various groups of influence in the government not only over the current socio-economic policy, but also about future development of the country, outlined more clearly. Some in the Belarusian establishment subtly promoted discussions about changing the institutional design of power through strengthening the role of political parties and parliament in public policy. Throughout the year, neither so-called ‘reformists’, nor the power bloc gained a clear advantage, however, a trend towards a more complicated public policy and reconciliation of interests emerged.

In 2017, the Foreign Ministry introduced a short-term visa-free travel for foreigners, despite the opposition in the power block. Due to economic benefits for local budgets and the economy, some regional authorities extended the visa-free travel term for up to 10 days and included new territories. Meanwhile, the power block enhanced its political weight after the spring protests and the clampdown on the participants in the rally on March 25th, and jeopardised Foreign Ministry’s achievements in the settlement of relations with Western capitals.

Authorities’ repressions against their opponents and independent media evolved throughout the year. When social protests against the decree ‘on social dependants’ started, the authorities had not taken any restrictive measures against the protesters, most of whom represented previously apolitical social groups in the regions. However, on March 25th, 2017, the power block received carte blanche for a power operation against protesters in Minsk, who mainly represented an opposition-minded electorate. Law enforcement resumed mixed punitive practices, alternating fines and arrests depending on the situation.

The authorities particularly focused on persecuting Belsat journalists; this TV channel largely lost support among the Polish establishment, but played an important role in covering protests in Belarus. In addition, the authorities initiated criminal proceedings against 35 ‘patriots’ from the White Legion organisation. However, in late autumn, after the protest movement leaders abandoned street activity, the White Legion case was terminated. As the NGO Assembly and the Centre for Legal Transformations (Lawtrend) marked in their annual review, the state policy towards the opposition and civil society, was inconsistent: interactions between the state and civil society enhanced, while the state stepped up repressions against civil society.

The authorities probed changes in the economic model

The economic authorities, including the Finance Ministry, the Economy Ministry and the National Bank held their positions in discussions with supporters of the old economic model about the monetary policy, which had become more responsible. However, industrialists attempted to use external lending to implement their projects of regional re-industrialization, which, among other things, could increase Belarus’ public debt.

There was an obvious redistribution of lobbyist weight between groups of influence from the “old” and “new” economies in the state policy matters. The trend towards the reduction in influence of the agro-industrial lobby on the top management anchored. For instance, the budget forecast for 2018 envisaged major funding cuts for the Agriculture Ministry, up to 20.4%. In turn, the lobbying potential of the High Technology Park significantly increased, and resulted in the adoption of a progressive decree in the IT sphere in late 2017. Nevertheless, positions of industrialists and supporters of the re-industrialization remained strong. Yet the lack of funding prevented them from launching a major modernisation programme or establishing new production facilities. That said, in late 2017, tension between the top leadership and directors of industrial giants increased.

The Belarusian leadership tested likely reforms in the existing economic model. For instance, it made cautious attempts to expand the private sector of the economy at the expense of large investors, who could replace inefficient state enterprises, which, in turn, would reduce political risks for the country’s leadership. The IT sector, where workers were paid better than average and showed no interest in the Belarusian politics, also benefited from the government’s attempts to change the economic policy.

Some in the Belarusian establishment attempted to articulate their interests and communicate indirectly with the president about strengthening the institutional role of political parties and parliament in exchange for the loyalty to Lukashenka for the next two presidential terms until 2025. Belaya Rus quango, which aspired to become the party of power, was the most active in this regard. The Central Election Commission Head, Lidia Yermoshina, also cautiously supported the desire to reorganize the electoral system into a mixed model with greater role of political parties. The Liberal Democratic Party, a so-called constructive opposition close to the authorities, headed by Gaidukevich, assumed the leading role in articulating the desires of some representatives of the Belarusian establishment for a greater political weight. Meanwhile, the discussion about the electoral reform came to a standstill by late 2017 and did not prompt the president to start political transformations.

In all likelihood, spring protests prompted the president to conduct a major rotation in the state apparatus, just a few months after the suspension of the protest activity. Personnel reshuffles started with changes in the leadership in the most troubled regions and ended with rotations in the power block: the Interior Ministry and the Operative and Analytical Centre. Most likely, the top leadership was discontent with the quality of analytical support and subsequent decisions, which only emphasised the demand for the additional feedback from the population, such as independent analytical polling services, representative bodies and oppositional political parties, for a balanced picture. Government representatives and pro-government experts became more open to contacts with independent think tanks and participated in their events.

The local elections, launched in late 2017, follow the usual election routine with minor improvements for the opposition. The Belarusian leadership fully controls election organisers throughout the country. Despite an extremely low interest in the election campaign by the population and the state media, party nominees have doubled as compared with the 2014 local elections. This only emphasises the existing demand for an increase in the role of political parties in the power system.