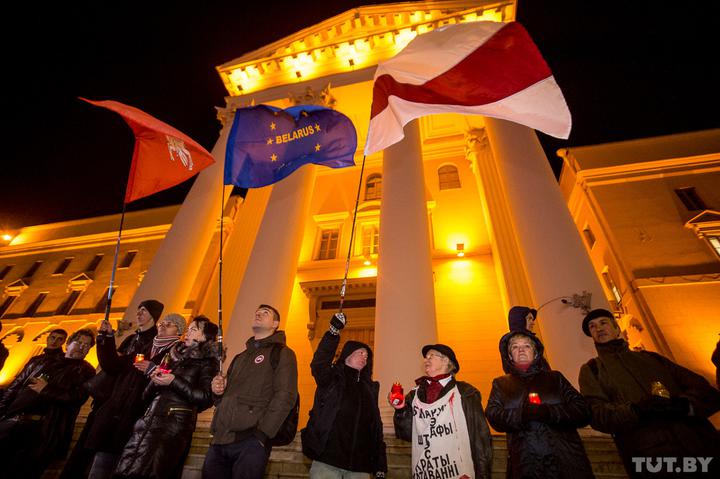 Civil society is successfully raising funds to support events related to historical memory and cultural initiatives. Despite the election campaign, the ultimatum opposition fails to create a positive trend in street rallies and mobilize the population for protests. Bloggers further strengthen their influence on political agenda through social media, including by harshly criticizing the current leadership.

“The Night of the Shot Poets” rally in Kurapaty, initiated by Dashkevich, brought together some 400 participants. The organizers managed to raise funds to cover the event costs through a crowdfunding campaign. In total, they raised nearly BYN 10,000 through Facebook, the Molamola crowdfunding platform and personal donations.

In turn, the opposition has organized an unauthorized rally near the KGB building for some 30 participants, entitled the ‘Memory Chain’ to commemorate victims of repressions. So far, the ultimatum opposition has been unable to revive street protests in Minsk and mobilize those discontent with the current state policies to participate. Nevertheless, Internet audiences have demonstrated an interest in political issues. A video by blogger NEXTA about the president was viewed 1.3 million times in a few days. A Youtube channel, ‘A country for living’ featuring exclusively political content and interviews of candidates is rapidly gaining popularity.

A representative event, October Economic Forum (KEF-2019) brought together over 1000 independent Belarusian and foreign experts, including the Belarusian economic authorities. Independent economists with the support of international institutions have created a sustainable platform for a dialogue with the Belarusian government, promoting structural market reforms in society and among the ruling elite. Meanwhile, the president remains the major obstacle for implementing such reforms, due to his fear of change and reluctance to lose control over the socio-political situation in the country.

Nevertheless, independent experts and economic authorities are attempting to conciliate their views and propose economic changes acceptable for senior management. The new five-year period will be dedicated to the digital economy.