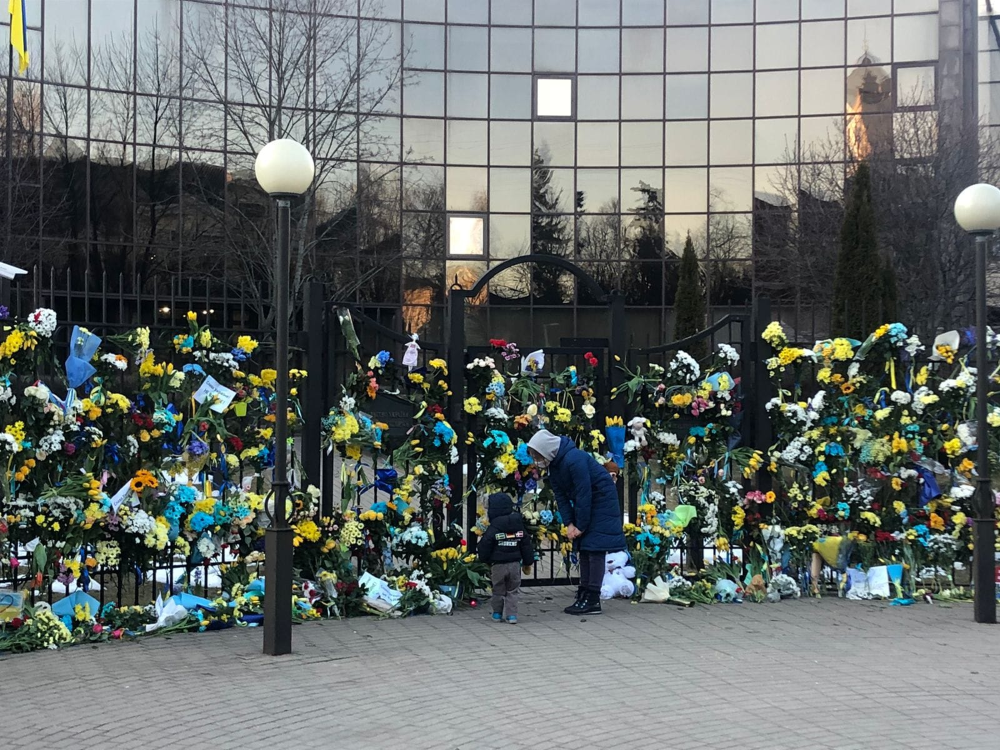 Democratic forces and civil society succeeded in seizing certain foreign policy functions from Minsk and partially delegitimising the Lukashenka regime in the international arena. The protest movement adopted an anti-war character stance in the wake of the Kremlin invasion of Ukraine and continued to successfully monitor military activity on Belarusian territory despite systematic repression. Political parties and democratic organisations continued to organise online events for sympathisers despite the unfavourable conditions for progressive developments.

The restrictive measures of the regime continued to diminish the audience for democratic forces. The Tsikhanouskaya Cabinet responded with increasingly strong rhetoric, but this did not contribute to the expansion of the audience.

Democrats led by Tsikhanouskaya initiated a partial mobilisation of supporters in February during the referendum. To a large extent, the trigger for protest activity was the Kremlin’s military invasion of Ukraine a few days before the plebiscite.

Tsikhanouskaya’s cabinet and other civil society Initiatives continued to communicate with supporters of change domestically through online media and self-publishing. However, their influence on the Belarusian information agenda has decreased significantly.

Cooperation between the IT sector and civil society cooperated to maintain connections between activists forced to relocate, developing online services such as eHealth. At the end of the year, the “New Belarus” platform was launched for testing, aspiring to evolve into a digital alternative to the state and expanding functionality to fulfil political tasks.

Reputational damage from media scandals had a negative effect on the credibility of the democratic movement. Issues included questionable personnel policies, such as the representative for defence and national security, Valery Sakhashchyk, holding Russian citizenship and allegations of fraud regarding Tatsiana Zaretskaya, the representative for finance and economy. The safety of activists was also questioned due to a GUBAZIK agent infiltrating the “Black Book of Belarus” project and general transparency of activities. However, the criticism has had a positive effect on transparency and communication with civil society.

Democrats retained influence in Western capitals and their interactions with Minsk. The democratic leader of Belarus, Svyatlana Tsikhanouskaya, attended numerous meetings with Western leaders, promoting promote the civil society agenda: delegitimization of the Lukashenka regime, sanctions, and Western support for civil society and the repressed. Democrats managed to distance, in the eyes of Western society, the Belarusian population, from the complicity of the Lukashenka regime in the Kremlin’s aggression in Ukraine. This made it possible to prevent or partially cancel many restrictive measures against Belarusians by European countries.

Tsikhanouskaya’s cabinet consolidated their diplomatic success and created additional tools for influencing Western public opinion and leadership, such as the “People’s Embassies” initiative of the National Anti-Crisis Management.

Democrat rhetoric towards the Belarusian ruling class gradually intensified in response to the refusal of the Lukashenka regime to engage in dialogue, increased repression, and persecution of dissenters. However, this did not expand the receptive audience.

A significant share of civil society communications involved human rights issues and opposition to repression; however, many Belarusians have already begun to forget about the events of 2020 and return to everyday affairs. Nevertheless, at the international level, human rights defenders have achieved significant success, confirmed by the award of the Nobel Peace Prize to Ales Bialiatski, the founder of the human rights centre “Viasna”, alongside activists from Russia and Ukraine.

In August, Tsikhanouskaya’s office held the “New Belarus” conference, aiming to ease tension in the democratic movement by updating the coalition decision-making structure and integrating popular pro-democracy initiatives within the framework of the United Transitional Cabinet.

The creation of the Tsikhanouskaya Cabinet, supplementing the activities of the National Anti-Crisis Management led by Pavel Latushka and the initiatives of ex-military forces, increased confidence in the democratic movement. The cabinet began training personnel to respond to any democratic changes in Belarus; however, the influence of the proto-government on the domestic situation is insignificant and consistently countered by regime security forces.

Valery Tsapkala’s team consolidated some strong critics of Tsikhanouskaya’s Office within the Forum of Democratic Forces. However, they did not have the resources to organise an alternative popular plebiscite and redistribute influence.

Volunteers from Kalinoŭski’s regiment maintained their distance from the mainstream democratic movement and attempted to establish an independent political base. This drew criticism from a large part of civil society, although the trust of the supporters of change in the volunteers remained high.

The influence of the Coordination Council on the democratic agenda gradually diminished. After the “New Belarus” conference in August, it was decided to carry out another reform of the representative body of Belarusian society and to integrate a wider range of civil society initiatives into its activities.

Following the Kremlin’s aggression in Ukraine, a decentralised anti-war movement was organised on the territory of Belarus with partial coordination with initiatives of ex-military forces and Cyber Partisans. Despite regime attempts at prevention, military activity was monitored throughout the year, tracking the movement of military equipment and detentions, arrests, and criminal cases against activists.

Guerrilla actions on Belarusian railways slowed the movement of military equipment, which was especially important during the Russian army invasion launched from Belarusian territory.

The positions of the democrats regarding the war resonated with the anti-war sentiments of the country’s population. However, due to the purge of independent media, the news cycle was partially filled with Russian propaganda with the active help of Belarusian ideologues who replicated Kremlin narratives.

Various civil society initiatives have organised a large-scale campaign to support Ukraine since the first days of aggression. However, domestically, the volunteer movement faced a brutal response from the security forces, which intensified with each month of the war. Nevertheless, political migration has created a developed infrastructure of support for Ukraine and assistance to Belarusian volunteers.

With difficulty, democrats managed to influence the Ukrainian leadership and somewhat improve the negative attitude of Ukrainian society towards Belarusians. Civil society has strengthened communication with Kyiv in an attempt to demarcate the Lukashenka regime and Belarusian society.

Democrats, led by Sviatlana Tsikhanouskaya, condemned Kremlin aggression in Ukraine and intensified criticism of the complicity of the Lukashenka regime. However, pro-European rhetoric has made it difficult to communicate with significant sections of Belarusian society who hold favourable sentiments towards Russia.

Income for crowdfunding initiatives decreased in a year of progressive anti-democratic reaction, decreasing international attention to the situation in Belarus, and activist fatigue from the long confrontation with the Lukashenka regime.