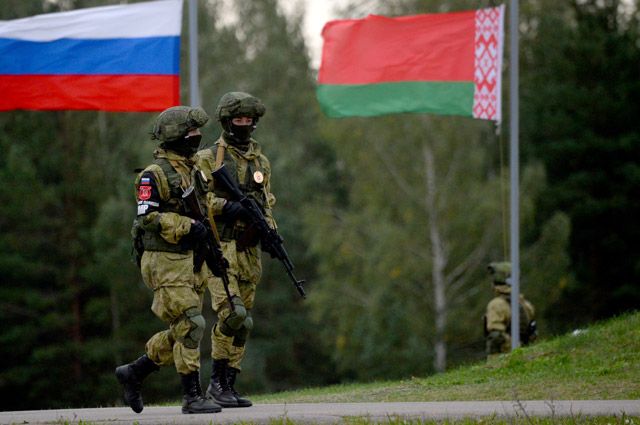 Summing up the outcomes of the past year, a non-critical deterioration in the national security system could be marked. The Belarusian leadership attempted to reduce dependence on Russia, however a boost in cooperation with other states did not make up for the reduced confidence in Russia over security matters. Belarus failed to remain entirely independent in the Russo-Ukrainian conflict, which led to reduced confidence in relations with Ukraine. Information policy was the weakest link in the national security policy.

Minsk aspired to use security cooperation as a platform for communication with the Kremlin. Simultaneously, the Belarusian leadership aimed to reduce the dependence on Russia through expanding military-technical cooperation with other states and producing own weapons and military equipment crucially important for the national defence.

Moscow-led reductions in the transparency of the Belarusian-Russian border persisted. The Belarusian authorities avoided public responses to Russia’s actions, however, simultaneously, began strengthening the border controls in the neighbouring regions. Minsk was ready to respond to the deployment of border guards by Russia at the border with Belarus.

Belarus’ chairmanship in the Collective Security Treaty Organization in 2017 was not a breakthrough. Minsk clearly demonstrated the limits of its commitments within the CSTO: only on the western (i.e. Eastern European) front. Hence, it confirmed, that the CSTO remained a platform for discussing security issues in the post-Soviet space, rather than providing a mechanism to ensure such security.

The influence of the Defence Ministry enhanced, but revealed problems in it

Throughout 2017, the Defence Ministry’s influence increased. In July 2017, for the first time since the restoration of Belarus’ independence Major General Oleg Dvigalev, former commander of the Belarusian Air Force, was appointed to lead the State Military Industrial Committee. De facto, the Committee had subordinated to the Defence Ministry.

Further, a law adopted in July 2017 approving the state budget report for 2016, recorded an unexpected increase in military spending in the last days of 2016 totalling USD 100 million. Allegedly, additional funds were spent on military equipment and/or its modernization.

However, a controversy which erupted in the autumn concerning illegalities in the army, caused a confidence crisis between President Lukashenka and Minister Ravkov and a public outcry with demands for his resignation. Taking into account the fact that Belarusian law enforcement heads were not independent political players, the president’s personal attitude towards them was the main source of influence in the power relations.

The authorities failed to respond adequately to information attacks

During 2017, the Belarusian authorities repeatedly demonstrated their inability to counteract information and psychological attacks from the outside. The state propaganda machine was unable to act without clear instructions from the top political leadership. The latter was often unable to formulate such instructions promptly. In February, false reports in the Russian media (including liberal ones) about Belarus’ withdrawal from the CSTO and the EEU and accusations that the Belarusian authorities by their actions undermined Russia’s security, prompted an extremely nervous response of Minsk: the Belarusian Ambassador to Russia provided explanations on Russian television personally.

In the summer and autumn, Ukrainian media disseminated information about the transfer of control over the Belarusian border to Russia, the creation of mechanisms for further aggressive actions of Moscow, and the expansion of the Russian military presence in Belarus. Again, the Belarusian authorities demonstrated their inability to parry information attacks.

Belarusian-Ukrainian military and political relations deteriorated significantly. Despite the interference of the leaders of both states with the aim to resolve problematic issues, there was a downward trend in bilateral cooperation. Power departments of Belarus and Ukraine engaged in a confrontational spiral (at the rhetoric level).

Difficulties with retaining neutrality in the Russo-Ukrainian conflict

Belarus consistently sought to establish as an independent actor in security matters. Despite alarmist sentiments in the neighbouring states, Minsk confirmed its ability to prevent the expansion of the Russian military presence and took a different (from Russia) position on regional security matters.

Minsk found it increasingly difficult to use regional security issues as a bargaining chip with the West and Moscow simultaneously. Belarus was expected to make concrete steps to demonstrate openness and conscientiousness in regional security matters. That said, Minsk made such steps. For instance, for the first time in many years, Russian military units which fought against Ukraine or were deployed to the occupied territories, did not participate in the military parade on July 3rd. During the Russo-Belarusian strategic military exercises Zapad-2017, Belarus demonstrated high openness levels, which, however, was not enough: Eastern European NATO members and Ukraine only confirmed in the opinion that the Belarusian Armed Forces were an integral part of the Russian military machine in the western strategic front (the Baltic states and Poland). Belarus’ openness was praised, but that was it. Nevertheless, Minsk sought to expand the field for interaction with the West through developing military and political relations with NATO as a whole and with individual member states.

Boosted cooperation with China and other states

Manoeuvres between Russia, the West and Ukraine reduced confidence in Belarus by all sides of the confrontation. In the case of a security crisis, Belarus would be unable to count on effective external support. Realizing this, the Belarusian authorities were interested in China’s arrival in Eastern Europe, as her position could be ignored by the regional centres of power. Cooperation between Belarus and China in the security field including the military-industrial complex, strengthened.

Some Soviet/Russian weapon systems could be replaced with Chinese ones, including those produced in Belarus at local military-industrial enterprises or new industries with the participation of Chinese capital. Belarus developed relations with Chinese military-industrial complex companies producing the most important products for Minsk (missile armament, wheeled armoured vehicles, shock UAVs, fighters, air defence systems, ammunition).

In addition, Minsk demonstrated readiness to find points of mutual interest not only with large and rich states, but also with countries with modest resources.

In general, Belarusian major security agencies were highly active on the international fora in their field of expertise (activities of special services were not disclosed for obvious reasons). Apparently, the Belarusian security forces received a task to expand international cooperation.