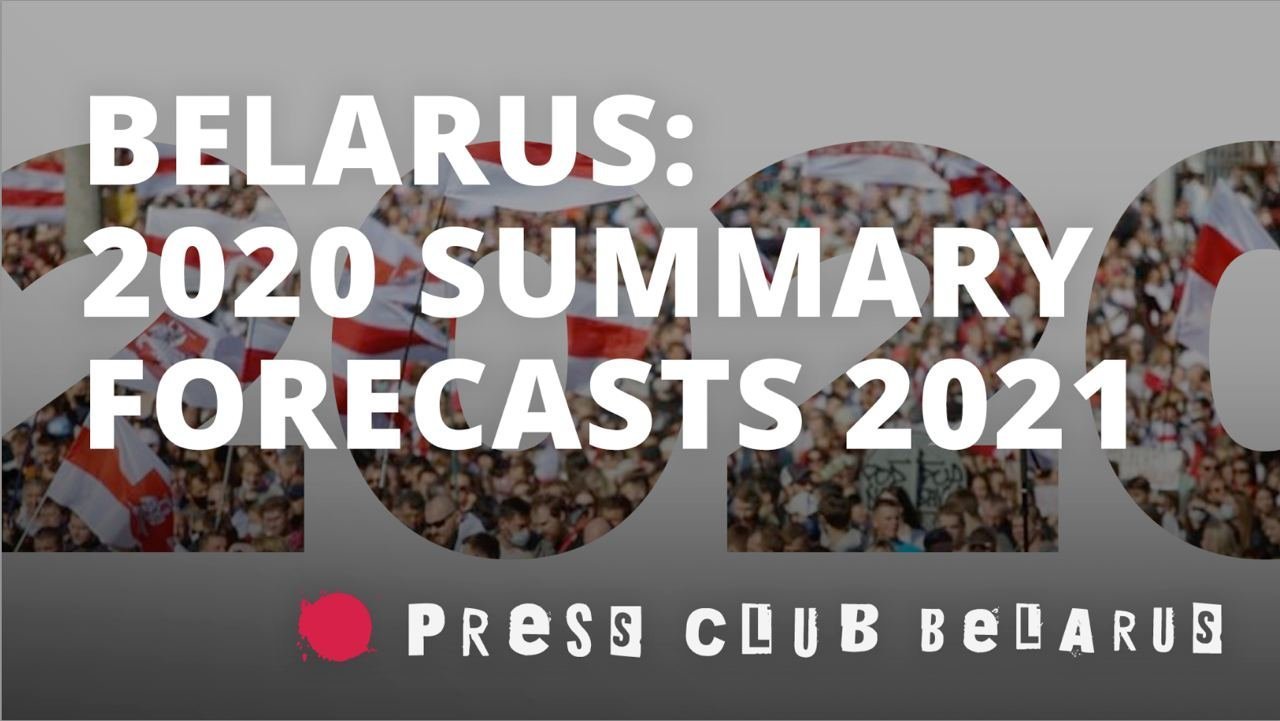 Horizontal revolution, information bubble and the political leader as a rock star.

On December 28th 2020, Belarus in Focus weekly analytical monitoring in partnership with Press Club Belarus, “Our Opinion” and the Belarusian Institute for Strategic Studies (BISS) held an international online meeting of the Belarusian Expert and Analytical Club.

Highlights from the discussion

Without listing all the things known to everybody, Hienadz  Korshunau draws attention to the fact that the horizontal revolution is only the tip of the iceberg. The social consequences of the digitalization have surfaced, including the growth of the private sector, changes in values ​​and new opportunities for mobilization using modern communication. Artyom Shraibman notes that the society has not accepted the format which was imposed on it and has not switched to violence. Alexander Dabravolski sums up: “There is hope for change and a sense of citizenship.”

For Philipp Bikanau the emergence of the political force “capable of pulling out from the political inactivity not only the opposition core, but also the people who were not politically active at all until May 2020, and who now participate in protests, became important.” Anatol Pankouski draws attention to the fact that in such a situation “a political leader can be created like a rock star in two weeks,” and democracy begins with local communities, where “we got to know our neighbours from a different perspective”. There is a rapid growth of civil society.

As Kateryna Bornukova notes, it is difficult to find achievements in the economy. She only singled out the decline in GDP which was not as drastic as it could be – “but this is most likely produced by thousands of additional deaths that could have been avoided.”

Daniel Krutzinna recalls the cliché “Belarus is the last dictatorship of Europe” and draws attention to the fact that Lukashenka was like Che Guevara – “a pop icon without a real idea of ​​who he really was”. And now Belarusians are known as brave and very proactive people. This is facilitated by the incredible activation of the diasporas.

Kateryna Bornukova expressed her disappointment with technocrats in the civil service: “They put the everyday mundanity not only above moral values but also above long-term economic growth”. Artyom Shraibman calls it “the relativism of the state apparatus”, and Anatol Pankouski calls it “the immoral nature of the state.”

Philipp Bikanau as a communications specialist is disappointed by the state’s unprofessional response to COVID-19: “If the response would’ve been a little more respectful, maybe nothing would have been triggered.”

Kateryna Bornukova is disappointed with the quality of the economic policy: “During the crisis, the authorities very quickly returned to their usual practices of supporting state-owned enterprises, and did not think about supporting people and the private sector.”

And Anatol Pankouski became disillusioned with the state as a whole: “Not only our ‘paper tiger’, but also many progressive countries in 2020 did not cope with the production of safety. According to Mr Pankouski, in case anything happens “the humanity will not save itself.”

Artyom Shraibman is morally and analytically disappointed with the fact that “we underestimated the information bubble in which people in power live”.

According to Hienadz Korshunau, the analysts also underestimated “the rigidity of mass consciousness, its encapsulation and the desire to see only what you see”. Informationally what happened reached everyone, but for a part of the population the fear of changing something turned out to be stronger than this trauma. Philipp Bikanau believes that there is a significant part of the population who are still inert and just want to return to normalcy.

Results of 2020 from a global perspective

Kazakevich recalls that before the elections Belarus had positive dynamics in relations with the United States and the sides reached an agreement on the exchange of ambassadors. Anatol Pankouski draws attention to the United States from a more global perspective: “Trump lost to Biden, and in such a manner the transatlantic regression can be stopped.”

Artyom Shraibman draws attention to the twists and turns in Belarus’ relations with Russia. In the first half of 2020, the relations between the two countries were at their lowest point since the 90s: “the conceptual crisis of the negotiations,” the failure of the Eurasian Economic Union summit, conflicts over the border and 9th of May parade, the arrest of the members of the Wagner Group and the capture of the bank. And later, all of this “in a couple of weeks changed to Russia’s ascension to the status of the holder of the keys to resolving the Belarusian crisis.” According to Mr Shraibman, this demonstrates that there are many sand-castles in Belarus-Russia relations, and situationally everything can change very quickly in these relations. There is no mutual trust, and it is unlikely that it will ever exist.

Kateryna Bornukova notes an important experience in relations with Russia: before the epidemic and the elections, Belarus began to live without Russian subsidies for oil, and because of the high price of gas, it rather subsidized Russia itself. “It was tough on the economy, but now we know what it is like.” However, now Russia has again become the only source of resources that Belarus can count on.

Anatol Pankouski notes that Belarus is not alone in its crisis – there is a crisis in one form or another in 3 out of 5 EAEU countries, and Russia itself has huge problems – ranging from Khabarovsk to Alexei Navalny. Alexander Dabravolski calls it “the continuing disintegration of the empire and the reformatting of the post-imperial space”. According to Valer Karbalevich, “the 2020 revolution destroyed the post-Soviet utopia,” and this understanding forced Russia to support Lukashenka.

Kazakevich predicts that the system will obviously change within a year, although this may happen according to different scenarios: “Institutionally, I do not see the resources using which this system can exist for an extended period of time”.

Artyom Shraibman recalls that the entire political trajectory of 2020 was shaped by a series of mistakes made by the authorities and the reaction of the society to them, and these mistakes will continue in a stressful 2021. Shraibman believes that the basic bifurcation now is how Lukashenka approaches the constitutional reform. If he chooses the path of a decorative change, the indignation of both the Belarusian society and Russia will follow. However, if Lukashenka begins a semblance of transit, at the same time trying to control it, then the resource of the system will allow it to exist a little longer. At the same time, even the most controlled successor will have a massive number of incentives to detach from Lukashenka, and given the latter’s style of “paranoid micromanagement”, a conflict between him and his successor is inevitable. And if the successor will have at least some powers they will be enough to end the regime.

Alexander Dabravolski agrees that the previous preventive authoritarianism cannot last long – the restoration of the legitimacy is needed for sustainability. The legitimacy can be restored after negotiations, resignation or elections. Moreover, having in mind the current growth of the civic consciousness, it will not be possible for the authorities to carry out mock measures, as no one will believe them and they will not return public confidence.

However, Artyom Shraibman believes that “you can live with a lack of legitimacy if this is the only problem”. Besides, he draws attention to the phenomenon of down-the-stairs legitimacy: if the society does not recognize the supreme power as legitimate, it does not mean that the legitimacy of the local administrative structures is not recognized.

Kateryna Bornukova draws attention to the global context: if vaccines help and there will be no lockdowns starting from spring, then the economy will face a general recovery everywhere including Belarus. At the same time, a lot of factors of the internal risk remain – ranging from the political instability to the loss of public confidence. State-owned enterprises continue to be unprofitable, and their debt burden reduces their ability to increase output even against the background of the recovery of the demand. And although this does not mean that the economy will collapse, “it is very bad that there will be no crisis – it compels action.” And during the sluggish growth of the economy nearing zero, there will be no decisive reforms.

Kateryna draws attention to the serious risk of migration: each surge of repressions and corresponding signals will lead to those having the highest potential continuing to leave. And the more time passes since their departure, the more this process becomes irreversible. Kateryna predicts that the economy will feel the consequences of the current migration for another 5-10 years.

Read more
Political parties boost election campaigning, human rights activists reiterate the political prisoners issue Belarus counts on the Union State to enhance its political weight; Russia anticipates to use the Belarusian gas pipeline network as a lever Political and civic organisations use the ongoing electoral campaign to promote local issues and advocate for the abolition of the death penalty
You have been successfully subscribed