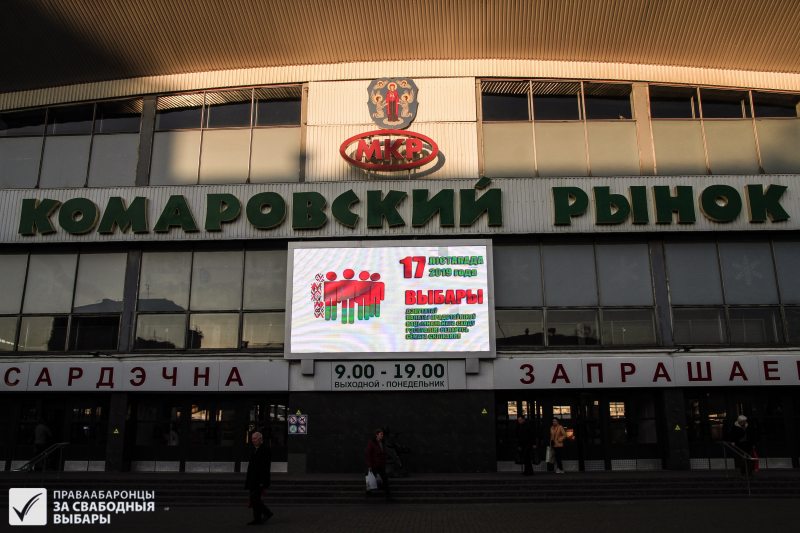 The CEC has deregistered nine candidates, campaigning in the state media and in the streets is censored and restricted; independent media gradually increase coverage of the campaign. Some oppositional and pro-government candidates have significantly improved their campaigning skills.

On October 31st, 2019, the CEC deregistered nine candidates, primarily representatives of European Belarus, who were registered through party lists. Some 20 candidates withdrew from the campaign on their own accord, those who were backing up pro-government favourites.

Candidates made pre-censored five-minute appeals on state TV within the rigid framework provided for candidates. TV channels do not allow candidates to repost TV appeals on the Internet and ban their distribution, however, numerous social media users share them online independently.

All appeals by opposition candidates may be divided into several groups: pro-independence, fair elections, restoration of justice, and political lobbying of ongoing civil campaigns. Many candidates referred to all these issues at once in their appeals, but the focus was nonetheless different. As in 2016, the 2019 campaign features many new, well-prepared candidates: such as Olga Belyavtseva, Alana Gebrimariam, Nadezhda Gatsak, Egor Levachev, Sergey Olshevsky, Tatyana Lasitsa, Tatyana Kanevskaya, and candidates who had bright campaigns in 2016, confirmed their reputations: Olga Kovalkova, Andrei Dmitriev, Ilya Dobrotvor, Julia Ganisevskaya, Anna Kanyus and others.

Some appeals by opposition candidates were never broadcasted due to the broad interpretation by the authorities of legislative provisions regarding calls for a change in the constitutional system, for example – criticism of the authorities’ policies. On the same grounds, some debates were not broadcasted. However, debates between Anatol Lyabedzka and his opponent in Gorki, aired, in fact, reflecting a major trend in the debates – all alternative candidates attacked pro-government ones.

The authorities have responded to this trend in the election campaign in their own way, either hastening the adoption of the law or prompting the amendments to take legal force, or holding meetings with pressure groups or even meeting with the president. Many local issues related to infrastructure development are addressed directly during the campaign. The CEC has deregistered the only candidate who represented the protest movement in Brest fighting against the battery plant, Uladzimir Maroz. However, as in many other cases, the solidarity between democratic organisations and pressure groups has enabled a picket to be held within the election campaigns by Brest BSDP activists Ana Kanyus and Ihar Maslouski.

Independent media provided better coverage of the second week of campaigning. Meanwhile, social media (including candidates, democratic organisations and thematic pages and blogs) remain the leading instrument for getting to know candidates and their programmes. A popular Youtube channel “A country for living” has also given floor many candidates and urged citizens to participate in the election observation.