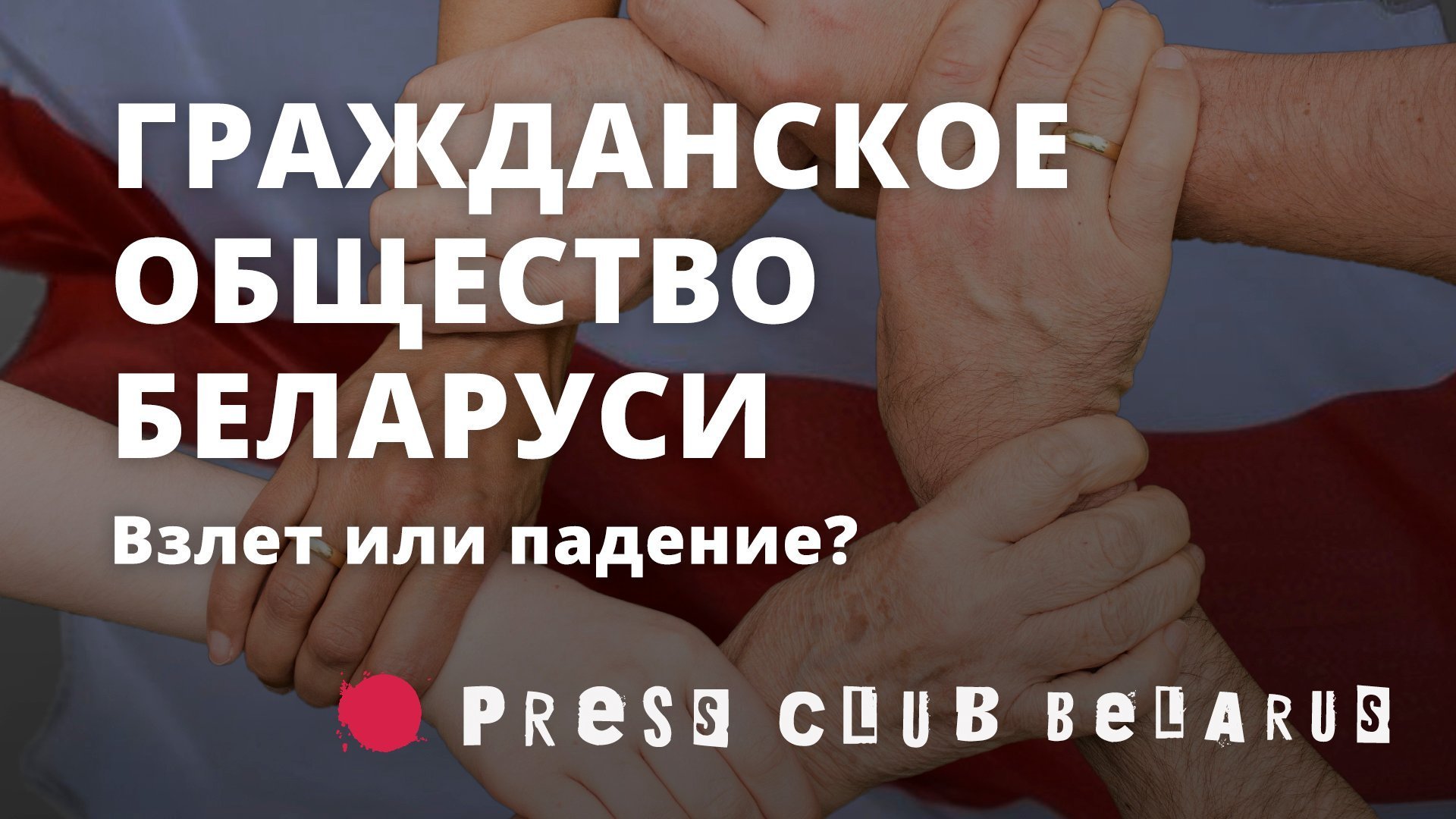 On March 18th, 2021, Belarus in Focus weekly analytical monitoring in partnership with the Press Club, the “Our Opinion” expert community website, and the Belarusian Institute for Strategic Studies (BISS) held an online meeting of experts and analysts to discuss civil society in Belarus.

The main speakers were:

“I am a confirmed pessimist: I expect the worst, but I still carry on” (Stanislava Terentyeva);

“Since the election campaign, the authorities have not differentiated between the “Youth Bloc” and the “ZBS”, and have persecuted all the same” (Daria Rublevskaya);

“We broke the eggs in the summer, and now we are making the omelette. It is not yet clear whether there is enough salt and whether it will rise” (Andrej Stryzhak).

Uladzimir Labkovich notes that while the authorities turned away from the problem and “started making nonsensical claims about treatment with tractors and vodka,” society rose to the challenge. The work of Civil Society organisations helped to avoid an even greater death toll. An unanticipated consequence in the view of Stanislava Terentyeva is that “COVID prepared us for what happened in August and onwards.”

While working for #ByCovid19, Andrej Stryzhak encountered many middle-level doctors struggling to uphold the Hippocratic Oath while the authorities left them to fend for themselves. Protests arose within the medical community, “people were tearing their hair out over the inefficiency of the authorities. The coronavirus does not discriminate between a government official and the unemployed; everyone is at risk, and everyone wants to live.

Stryzhak notes that the success of the # ByCovid19 volunteers is so self-evident that the authorities seek to appropriate its achievements rather than denigrate the movement.

The rise of volunteering

Volunteers were in evidence throughout the political campaign. Uladzimir Labkovich recalls that human rights activists anticipated 200-300 volunteer election observers, but more than 1500 actually came forward (other observation campaigns had even more). Human rights activists coped with this influx conducted training, and after August 9th, they dispatched volunteers to courts to compile lists of detainees, collect testimonies of victims of violence, and assist those leaving Akrestsin Street. The business community also volunteered offices, equipment, food and other resources to assist activists.

“Belarus has become a full-fledged global nation,” says Andrej Stryzhak: the diaspora did not forget their homeland and were actively involved at all stages. After the elections, “emigration centres” formed, differing from the diaspora in that “we do not integrate into society here, we work remotely in Belarus”. The headquarters of Sviatlana Tsikhanouskaya stands out as “an advocacy office that promotes the interests of Belarusian society in the West”.

Successful advocacy campaigns include the cancellation of the World Ice Hockey Championship, the expulsion of Belarus from the Eurovision Song Contest, and the publication of testimonies from protesters who suffered torture. Stryzhak is sure that “even if there is complete repression of civil society in Belarus, people abroad will continue to defend the interests [of Belarusians],”

Funding: from crowdfunding to cryptocurrencies

Uladzimir Labkovich notes the rise of crowdfunding platforms as an essential source of domestic funding for civil society and the regime’s subsequent suppression of such initiatives.

However, Andrej Stryzhak observers that cryptocurrencies are circumventing these countermeasures: “the interface to cryptocurrency simplifying, so that an elderly worker who uses the phone to go to Odnoklassniki can get help from the BySOL fund”. Digital literacy in Belarus significantly improved in 2020, as Belarusians became world leaders in the use of VPNs.

Courtyard communities and other Local Initiatives

“We didn’t know each other until this summer”: Belarusians experienced a paroxysm of self-organisation, unlike anything in the last 30 years, believes Andrej Stryzhak. Improvised support for victims and local courtyard meetings may develop into organisations with long-term objectives, despite the authorities’ opposition.

Society can overcome learned helplessness and become politically aware. Stanislava Terentyeva agrees that “People have learned to ask questions”, demanding civic education and self-organisation. Superimposed upon this is fatigue from being forced online, causing live events to attract more people than one might expect. Uladzimir Labkovich notes many requests for courtyard lectures on human rights.

The main problems of civil society in 2020

Uladzimir Labkovich recalls the Press Club case, the Viasna case, the Andrei Aliaksandrau case, the BAJ case and the treatment of independent trade unions. In summary: “Will civil society continue to exist in the form it has taken 30 years to develop? We may find ourselves in a situation similar to the USSR when there were no human rights activists with offices, and most were behind bars or exiled abroad.”

Two of the four speakers of the expert-analytical club are abroad. For Andrej Stryzhak and Darya Rublevskaya, the choice was between “prison or emigration.” Uladzimir Labkovich divides Belarusian civil society into three categories: “Those who remained in Belarus, those in prison, and those who have already left”. However, he remains in Belarus, along with most other Viasna activists. Stanislava Terentyeva adds that activists in the regions are under closer scrutiny since there are fewer of them, and any emigration seriously damages the sector.

Uladzimir Labkovich cites some depressing historical parallels: in 2010, the number of political prisoners peaked for a couple of weeks at 57; there are now more than 300, and if things continue as they are, there may eventually be more than 1000. “The last time such repressions took place in Europe was during World War II … We already have more victims than during martial law in Poland, during the Prague Spring. “

Aiding victims was not criminalised in 2010, and although the head of Viasna, Ales Bialiatski, was in prison, the rest remained at liberty, and there was no similar wave of emigration. The policy then was “to take everything under control and to intimidate; now the message is to destroy everything. This government will be unable to stop the repression”.

“Students are one of the most vulnerable groups”

Daria Rublevskaya said that the university administration ignoring the COVID epidemic signalled the start of physical threats to students. ZBS activist Lizaveta Prokopchik was expelled for advocating for distance learning, and from September 1st, widespread prosecutions of students began. There are already more than 30 criminal cases carrying penalties of 2-3 years. The public prosecutors’ office is processing 36 volumes of “Student Cases” against 11 students and 1 teacher.

Everything is now political

Uladzimir Labkovich laments the fact that the distinction between political activity and civil activity is evaporating: “Politicisation degrades the social sector – the services provided by civil society.” The authorities are afraid, and many grant programmes have been suspended.” Stanislav Terentyev confirms this: “previously Vitebsk was considered to be a city where communication between civil society and local officials went well. Such cooperation has now ceased for ethical reasons (we will not work with government agencies) and due to instructions from above (interference in selecting sites for events). “

Daria Rublevskaya fears that many recently engaged citizens will lose interest just as quickly when it becomes clear that civil society is not involved in politics. However, Uladzimir Labkovich takes a different view; when the situation ceases to be black and white, we will see an outbreak of civic creativity thanks to the arrival of new people in the sector. It will be possible to “re-create civil society when the political problem is removed.” Andrej Stryzhak considers the politicisation of civil society to be a “natural response to challenges” and compares the situation to wartime, after which it is necessary to return to a peaceful course.

Although state TV accuses Andrej Stryzhak of all mortal sins, he remains optimistic: “We are grateful for the advertising campaign that ONT, STV and BT have arranged for us at no cost. – the harder state propaganda tries to destroy someone’s reputation; the more people are convinced that the accusations are lies. “Uladzimir Labkovich agrees that television has discredited itself to such an extent that propaganda poses no threat to the moral authority of civil society.

On the contrary, Labkovich notes the improvement in general attitudes towards human rights activists. After the mass searches of the Viasna volunteers, activists from local courtyard communities were the first to get in touch with offers of help. When Uladzimir told his neighbours that he was a human rights activist, “it was like a Beatles tour of America.”

Some “people have endowed [human rights activists] with magical functions”; this is touching but also confers a great responsibility and the threat of reprisals.

Daria Rublevskaya has long been prepared to be libelled by state media: “Since the election campaign, the authorities have not differentiated between the “Youth Bloc” and the “ZBS”, and have persecuted all the same.” However, “it is impossible to erase 30 years of work by an organisation with a couple of comments in the media.”

Stanislava Terentyeva observes that in the regions, the image of organisations is strongly coupled with that of their leaders so that personal vilification can have a systemic impact. Personal data leaks and threatening leaflets posted on houses are other tactics being employed. Andrej Stryzhak sees this problem as well: “The propaganda has not yet reached everyone and is focussed on the most visible key players, but we are stable.” Then the propagandists adapt and try to draw in others in the region. What is the solution? “Our task is straightforward – to win as soon as possible.”

Originally published at “Our Opinion“

Read more
Sochi meeting: bilateral rapprochement without a breakthrough Civic activists and business have reduced support for doctors; the price of engaging in politics for civic and political activists has increased Political differences in Belarus’ relations with the West have deepened, so far, without practical consequences
You have been successfully subscribed