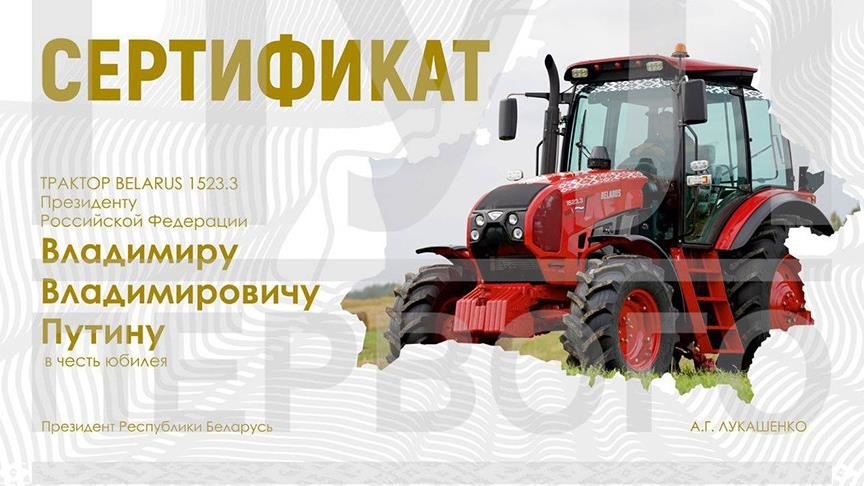 According to Belarusian officials, the long-running economic problem of oil sector tax reform has finally been resolved, in addition to the arrangements for a USD 1.5 billion loan from Russia.

Only recently returned from his last visit, Lukashenka departed for his 8th visit to the Russian Federation on October 7th, this time to St. Petersburg, where an informal summit of the heads of state of the Commonwealth of Independent States was held, timed to coincide with Vladimir Putin’s 70th birthday. Lukashenka and Ramzan Kadyrov presented unique gifts.

An Olympic Judo Training Centre named after Putin was opened in Grozny, the capital of Chechnya, on October 7th, and Lukashenka presented his Russian counterpart with a “Belarus 1523.3” tractor. He noted that this model comes with a seeding machine to allow Putin to grow wheat for bread. Lukashenka commented: “We will sow bread, maybe something else, it is universal. Let’s grow! And Duda, Morawiecki [Polish Leaders], Europe, so that they do not starve, so that they do not steal bread in Ukraine”.

Also on October 7th, a meeting of the Coordinating Council of Heads of Tax Services of the CIS member states was held in Minsk. Belarusian Minister of Taxes and Duties Siarhei Nalivaika reported that Belarus and Russia are completing an information system for monitoring indirect taxation. Recently, the parties signed an agreement on the general principles for excise duties and VAT. The document specifies that by January 1st, 2023, the Russian Federation and the Republic of Belarus must bring their tax legislation in line with the agreement’s provisions.

A few days earlier, Belarusian Prime Minister Raman Halouchanka said that the treaty completely solves Minsk’s issues with Russian tax reform in the oil sector. He said, “In the tax reform issue, Russian colleagues have made concessions, and now this problem has also been resolved.”

The text of the treaty has not been published. However, this is unimportant as the “union state” parties do not respect the rule of law and rarely allow themselves to be hampered by domestic laws or international obligations.

Halouchanka reminded the public that Russia promised to allocate more than USD 1.5 billion to Belarus for import substitution, which will be directed towards local sourcing of automotive components. By the end of this year, seven such projects worth about USD 330 million should be underway, mainly in mechanical engineering. Russia remains in no hurry to deliver the loan.

The possible involvement of Belarusian troops in the Russian military adventure remains relevant. According to Ukrainian intelligence, Putin actively tries to persuade Lukashenka to participate. The Ukrainian Foreign Ministry reported that Belarus summoned the Ukrainian ambassador and accused Ukraine of preparing a strike on Belarusian territory. The Ministry considers this a possible part of a Russian strategy of provocation.