On November 8th, Putin and Lukashenka spoke by phone regarding bilateral relations with an emphasis on trade and economic cooperation, issues relevant to the upcoming CSTO meeting, and scheduled meetings for the remainder of the year.

Experts from the Eurasian Development Bank (EDB) note that Belarusian exports to Russia are significantly supported by a favourable exchange rate. The EDB report states that the real value of exports “decreased by 4.8% YOY following a 0.1% YOY decrease in August”. Considering increased supply-side costs, this may correspond to an even more significant reduction in the physical volume of exports. Increases in exports to Russia and Asian and African countries have not yet compensated for the decline in exports to the EU caused by the disruption of production and logistics chains, etc.

This negative assessment has not affected the enthusiasm of officials for integration. Belarusian Energy Minister, Viktar Karankevich, emphasised that the consolidation of the Union State of Russia and Belarus makes it possible to resist Western sanctions effectively. However, he avoided specifics and spoke only of generalities such as “expanding the format of interaction” and filling joint programs and projects with “new content”.

Expanding “formats of interaction” is, of course, a reference to import substitution. Moscow hosted the Forum of Innovative Financial Technologies (FINOPOLIS), focusing on digital platforms, innovations in payment systems, and cybersecurity. One of the participants, the Russian T1 group, aims not just for import substitution but import anticipation regarding foreign markets in southeast Asia, Latin America, Africa, and the Middle East. One of many initiatives that smacks of propaganda optimism.

Belarus has a very high level of imports – 66.6% of GDP. Full implementation of an import substitution strategy will require an investment of tens of billions – significantly more than the USD 1.5 billion Russian loans. 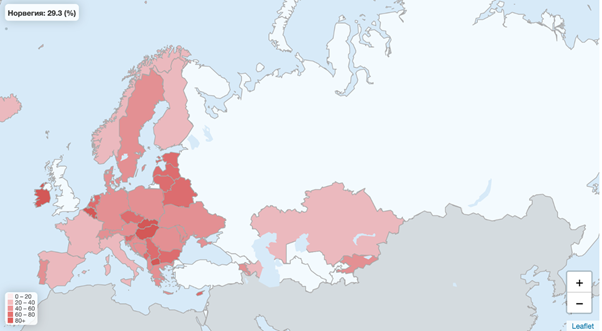 According to experts, the annual reports of Russian state-owned companies, cited as proof of import substitution, raise more questions than they answer. This year, a magical 83% (of GNP) is forecast. Fake import substitution benefits from huge state subsidies, creating opportunities to make money from Potemkin villages. That is why many people choose to remain silent and decline to challenge the lies (as a tribute to national traditions).

Playing on the side of the Kremlin, the Belarusian leadership tossed another rock in a southerly direction, adding to the record of mutual scandals, conflicts and misunderstandings. According to the Border Committee of Belarus, the Ukrainian military are laying minefields on the border and destroying roads and infrastructure.