The president’s order to demolish crosses on the graves of victims of Soviet repression in Kurapaty has been executed in a wink, unlike his other orders 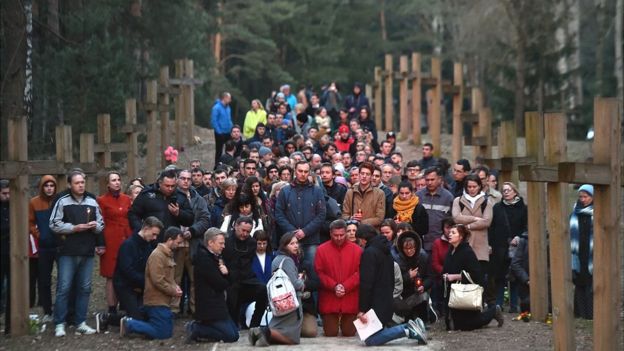 Amid usual failures of public fonctionnaires to execute president’s orders, the controversy over the Kurapaty memorial site has revealed the governance system’s vulnerability and the inability to ensure safety and has had an impact on relations with the West. That said, the country’s leadership has not moved an inch towards any progress in the public sector, investment or bargaining with Russia.

Yet during his major interview in early March, Lukashenka ordered to remove crosses and improve the Kurapaty memorial to the victims of Stalin’s repressions: “… let us take care of Kurapaty so that those [crosses] were not there and so that there were no demonstrations along those crosses either”. His order was executed bluntly and roughly: in the early morning of April 4th, disregarding the feelings of Christians during the Crusader Week, crosses were removed in secrecy by trucks with covered registration plates. Neither explanations were provided, nor the consent of the Culture Ministry, which oversees the historical-cultural area, was obtained. Only after photos and videos of construction machines dragging the crosses had gone viral on social, independent Belarusian and foreign media, and some opinion makers, MPs and church representatives had condemned the authorities’ move, the president’s spokesperson provided some explanations. In addition, law enforcers detained those activists who attempted to protest the dismantling.

Overall, the execution of the president’s order, which, according to the president’s spokesperson, was intended as a reconciliation gesture and a demonstration of his sensitivity to public sentiments, has become an act of vandalism, insulting the feelings of both, the general public and Christians. The media and the public have noted the weaknesses of the decision-making system, which has manifested in the Kurapaty case.

Amid regular non-fulfilment of presidential orders related to the economic policy, the Kurapaty case has gained an additional dimension. In particular, the modernisation in woodworking, cement and flax production industries had failed and public funds spent on it had zero economic efficiency. The economy is regularly facing problems with agriculture and sugar industry’s efficiency, struggles to appeal to investors and create new jobs. That said, the field where Lukashenka’s orders are being executed is very narrow and is limited to staff reshuffles and implementation of cultural and entertainment initiatives.