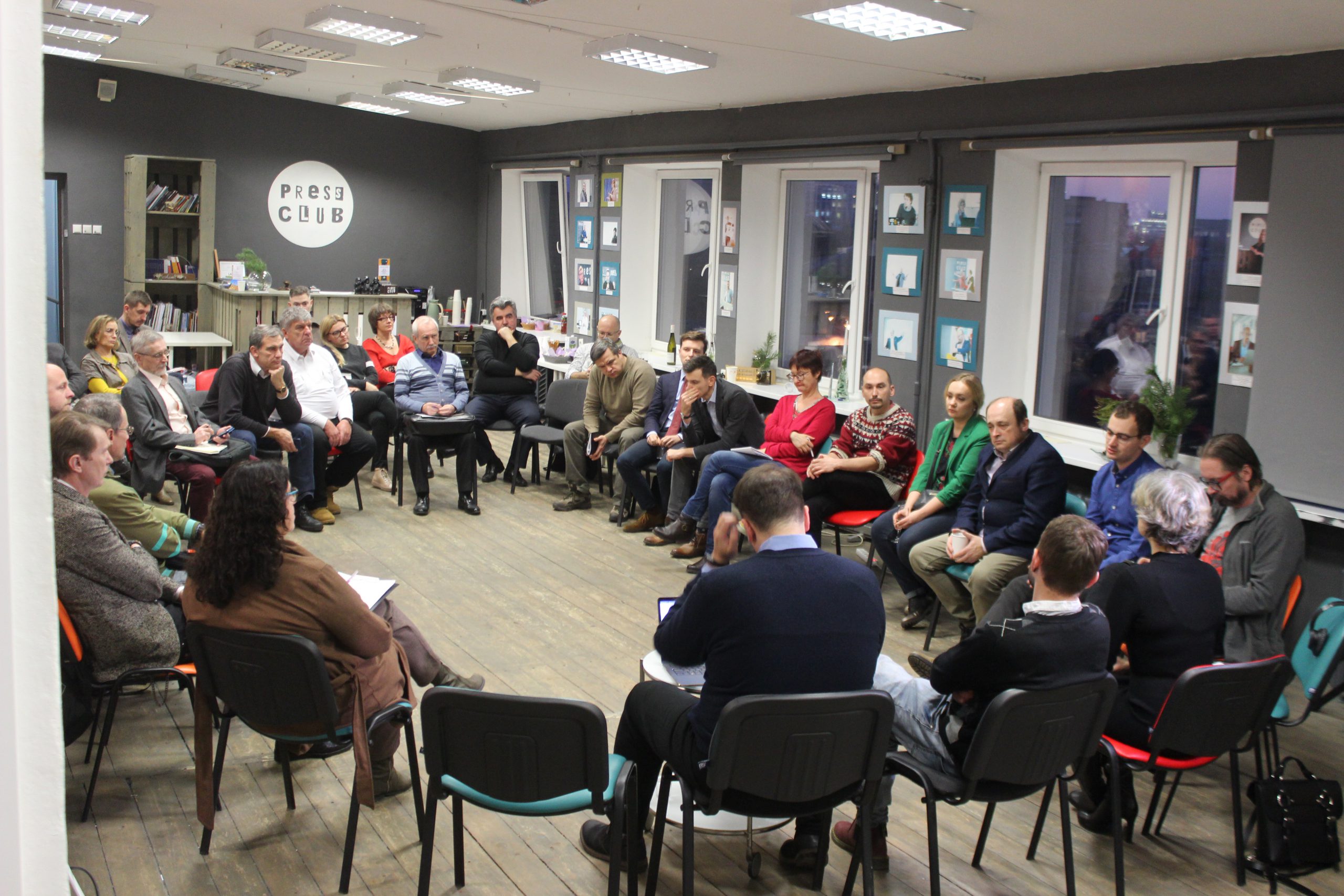 On December 18th, 2019, Press Club Belarus, the website of the expert community of Belarus “Our Opinion”, Belarusian Institute for Strategic Studies (BISS) and Belarus in Focus weekly analytical monitoring held the regular meeting of the Expert Analytical Club: they summed up the expiring 2019 and outlined forecasts for the year ahead.

The representatives of the analytical community were the main speakers:

The participants discussed the following questions: 1) What are the main trends of 2019 that will affect the agenda in 2020? 2) What will the economy of Belarus be before the presidential election, and what will it be after it? 3) East-West: what to expect from the Belarusian geopolitical swing? 4) What will determine the life of the Belarusian regions: the local government reform, the expansion of the visa-free travel, “Orsha offshore” or emigration? 5) What are the main threats and the main defenders of Belarusian security?

Artyom Shraibman singled out the introduction of the topic of the constitutional amendments to the public debate: “If this process reaches conclusion… the countdown [of the reform] will be from 2019”. However, Artyom added that the process of changing the Constitution can be transformed and/or postponed. Siarhei Chaly, in his turn, expressed doubts that any changes are being seriously prepared at all: “There is nothing left from the original theses of the empowerment and rejuvenation of the branches of power”. As for the parliamentary elections, Shraibman noted that they marked the apathy and depoliticization of the society. However, new civil society movements, such as Mother 328, Legalize Belarus, and protest groups in Brest became politicized and they manage to achieve the attention of the authorities and at least some success. At the same time, the authorities react nervously to these groups and the candidates from these groups were either not allowed to participate in the elections or removed from the campaign after being registered. Instead, the parliament was filled with the active members of the bureaucratic elite (e.g. head of the state TV company Davydzka, former spokesperson of the Ministry of Foreign Affairs Savinykh, deputy KGB chairman Mickievich) and this fact potentially increases the parliament’s political weight.

Artyom Shraibman also believes that the participation of the old radical opposition members was unexpected and showed their weak mobilization potential: the rallies of old politicians such as Statkevich gathered the average of 200 people, and the rally of blogger NEXTA ‘without agenda and messages’ gathered 500 people.

Valery Karbalevich noted the trend of a sharp decline in public confidence in the authorities and asked: “How long can the authorities in Europe rely on force?” Artyom Shraibman replied that it was hard to assess the social attitudes without independent sociology but that in any case earlier “there was a drop in Lukashenka’s approval rate to 20% according to IISEPS – and nothing happened, he survived”.

Siarhei Chaly singled out the main event in Belarus’ economy in 2019: “There is this final realization that the recovery growth is over, and there are no sources of the domestic economic growth; there are even no ideas for such a growth”. Meanwhile, without economic growth, it would be impossible to stop “the catastrophic loss of the human capital” – both youth and the working population – caused by emigration. However, “the economic growth is approaching its equilibrium value of 1.5 – 2%, which does not even allow catching up with Belarus’ neighbours”. But even this equilibrium is under threat by the growing gap between labour productivity and income growth which can cause a new devaluation of the Belarusian ruble.

According to Siarhei Chaly, the Belarusian business climate is so bad that nothing survives without having special conditions. The main reason for this is the high level of interference of the security forces and state inspection agencies in the business operations. After climbing out of the debt hole, the business chooses to emigrate. At the same time, “classical extractive institutions” such as the Belarusian National Biotechnology Corporation are growing. Chaly’s final forecast is pessimistic: Belarus has already lost 5 years, even before 2015 presidential elections it had been clear that the economic reforms were necessary, no reforms took place after the elections, Belarus will lose another 5 years. Moreover, Belarus refinances its external debt by borrowing and any “cash gap” can lead to a default.

Foreign policy: “the most utilitarian approach of both sides” in Belarus-Russia relations

Artyom Shraibman thinks that the relations between Belarus and the West would not lead to breakthroughs. The positive effect of the Schengen visa fee reduction to €35 will be counterweight by a temporary increase of this fee to €80. As a maximum, the new US ambassador will arrive in Belarus by the end of 2020. As to 2020 presidential elections, the West will expect nothing more from the authorities than the absence of brutal suppression because “there are no surprises expected” and “the bar is low”.

Artyom Shraibman doesn’t expect progress in Belarus-Russia relations: “It seems that nobody expects this anymore”. The bargaining will continue in 2020, Belarus will hope to receive partial compensation from Russia by 2024. Shraibman expects both Belarus and Russia to reach perfect clarity in their relations as both sides will demonstrate utilitarian approaches to the maximum extent.

Sergei Chaly is belligerent in this matter: Belarus needs to stop engaging in yet another integration process with Russia because the only reason it started this process – the common energy market – is as far away as before. He evaluates the results of the previous negotiations sceptically: “All the roadmaps that were agreed concerned already resolved issues; the ones that were not agreed in any way required political will”. Nevertheless, Chaly believes that Belarus will be able to convince Russia that the latter is wrong and that the proprieties must be observed in the union: “If there is a logic of foreign trade, then there is no union”.

These difficult negotiations take place against the background of the increasing Russian propaganda aimed at Belarus – both Press Club Belarus’ founder Yuliya Slutskaya and media analyst Pauliuk Bykouski noticed this. They note that the Russian media promote different narratives for different audiences – “no alternatives to the union with Russia” for Belarusians and “Lukashenka is unfaithful to the alliance” for Russians. Belarusian contradictions don’t reach such a large audience as Russian fake news hit jobs.

Safety: “The tanks won’t be able to pass where the alarmists draw the arrows on the maps”

He singled out the purchase of the expensive aviation from Russia which Belarus doesn’t really need as the main negative trend. In particular, Spatkai talked about Su-30SM fighters which fly too far for small Belarus and helicopters which are now based too far from the special operations forces, which they must transport. He believes that Russia simply imposed its expensive aircraft on Belarus after it lost its traditional markets such as India and Indonesia who don’t buy Russian military products anymore as they fear to be slapped with US sanctions.

Spatkai singled out the emphasis on the development of special operations forces which takes into account the experience of Ukraine as a positive trend: “They [the special forces] now train to lift blockades of the administrative buildings”. He considers the career growth of the commander of the special operations forces Alieh Bielakonieu as a symbol of this; the latter had first become the chief of the General Staff, and now became a member of the parliament.

“The weak staff of the internal affairs, especially in the east of Belarus” remains a key threat since Russian legislation allows these people to earn extra money in their free time in Russia.

Leanid Spatkai is calm about the augmentation of the armed forces near Belarus’ borders.  In his opinion, Russia is strengthening its military presence on its western border for its own defence, and not to annex Belarus: “The tanks won’t be able to pass where the alarmists draw the arrows on maps”. He explains the deployment of the US tanks in Lithuania close to the Belarusian border which caused panic in the Belarusian media by the presence of the proper infrastructure in this place from the Soviet times.

In relation to this matter, BISS analyst Vadim Mojeiko recalled the absurd publication of the ONT state-owned TV channel on Facebook which claimed that the American tanks had not been so close to Belarus since 1945: “The Americans were our allies back then”.

Regions: internal competition and the ghostly prospects of self-government

Anton Radniankou noted that salaries in Minsk today are 40% higher than in the regional cities and towns and that this gap would widen. Also, the “Index of Belarusian Cities 2019 ” recorded a growing gap between the regions as they begin to compete with each other. Homiel and Mahiliou are more depressed, at the same time the economy is growing in Hrodna and Brest, which is partly due to the visa-free travel: as many foreigners arrived in Belarus using the western visa-free zone in 2019 as using the Minsk airport. Because of the tourists, the load on the infrastructure of Hrodna and Brest is increasing: there are no places in the hotels, the prices are rising in the restaurants. In the east of Belarus, the tourists visit farm stays and not cities, which takes a toll on Homiel and Mahiliou.

Siarhei Chaly notes that “the local poverty traps are forming in the regions”, where the lack of infrastructure and human capital form a vicious circle. According to the analyst, the state is aware of this problem; the president’s visits to the lagging regions symbolize this awareness, but the authorities are unable to offer an adequate solution. As for the so-called ‘Orsha Offshore’, it can be successful only because the whole country will work for it to be successful, but there will be no real benefit from such success.

According to Anton Radniankou, this leads to the fact that if earlier local officials relied on their weight in the administrative system, now “some regional leaders feel like politicians, they start to flirt with the society.” For example, the head of the Brest executive committee packed the house for the personal reception of the citizens after protests over the battery factory. In contrast, there are also many environmental problems in Mahiliou, but the authorities don’t allow rallies in the city centre.

Nevertheless, the analysts are unanimous that all of this will not lead to the development of the local governance. Pauliuk Bykousky believes that the increasing number of protests “is more likely to reduce the likelihood of a delegation of power to the local level” and Siarhei Chaly believes that this will simply increase repressions. Valeria Kostyugova also suggested a mixed version: “Either they [the authorities] will get tough on the protesters, or they will delegate the power to the local level without giving money and in such a manner pretend it to be a local government reform”.

Read more
Belarus and Russia: happy together? Independent trade unions lose members; the Belarusian National Committee promotes street protests Crimes are on the rise in Belarus for the first time in many years
You have been successfully subscribed