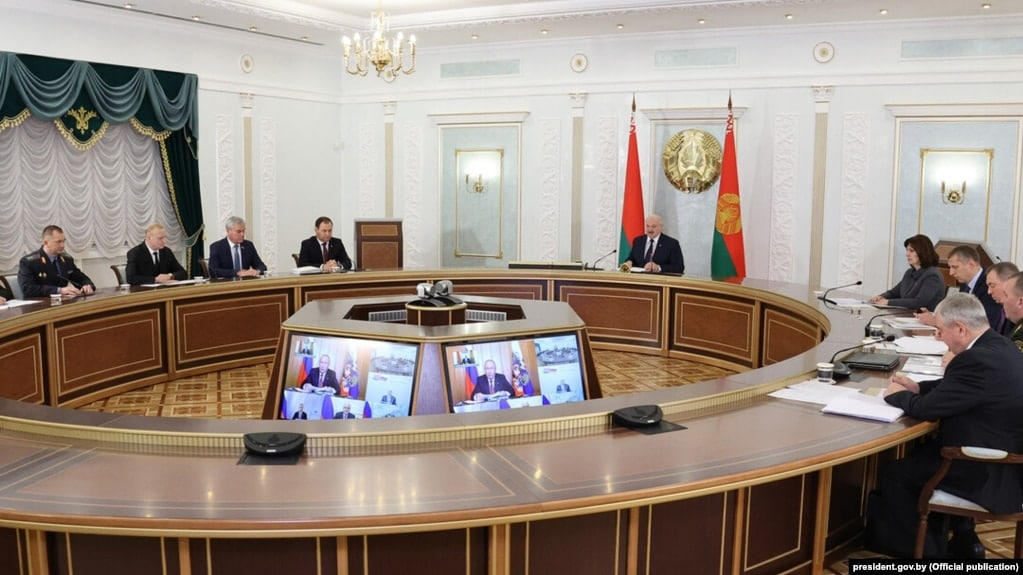 Vladimir Putin and Alexander Lukashenka approved a package of the so-called 28 union integration programs between Belarus and Russia. All the experts who were wondering whether these programs would be signed on November 4th turned out to be right in their forecasts: yes and no.

It is stated that the integration programmes harmonize and unify regulations via the creation of a common payment area, the adjustment of the principles of taxation, compatible migration policy, and an updated military doctrine.

The show of joint approval of the union programs themselves is very revealing. During the meeting of the Supreme State Council of the Union State, Putin was in Crimea, while Lukashenka was in Minsk. The Russian president pre-signed an integration program (“from the reverse side”, according to sources), which was then handed over for signature to the self-proclaimed president of Belarus.

If we leave out the peculiar (virtual) format of signing, as well as the issue of international legal personality of Alexander Lukashenka, many basic principles have been violated in order for the documents to have legal force.

The previously agreed and approved document is called the decree “On the Main Directions for the Implementation of the Provisions of the Treaty on the Establishment of the Union State for 2021-2023”. In other words, this is a 2021 agreement on the implementation of the 1999 treaty. Both, as already noted, have a dubious status in international law. In addition to a “decree” (a directive of supreme state authority), the document can also be viewed as a manifesto or declaration. In short, it is not entirely clear what exactly is signed, and how well the signatories themselves understand the essence of the document.

The document could be considered purely declarative, but almost nothing is known about the specific content of the programmes. The public of Belarus and Russia did not take part in the discussion of their content.

At this stage, integration does not imply any political, administrative, or monetary union; there are no bodies controlling the implementation of the “Manifesto on the Treaty”. The implementation of the provisions of this agreement relies on a “gentlemen’s agreement” between the parties. In other words, there is no enforcement mechanism and, consequently, Moscow and Minsk have not come close to resolving disputed issues.

Another integration “breakthrough”, the observer notes, is more beneficial to Putin than Lukashenka, at least in terms of the media effect. Bearing in mind the diverse expectations of the Belarusian side, Lukashenka has not yet received anything – even in the form of promises. This is despite playing a trump card he has held since 2014. Lukashenka asked his Russian counterpart V. Putin to invite him to the Crimea, which, according to a member of the House of Representatives of Belarus Andrei Savinykh, is tantamount to official recognition of the peninsula as Russian.